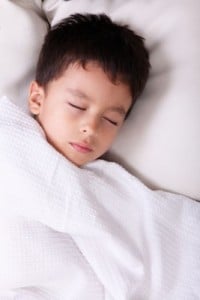 An extra 27 minutes in bed can make a lot of difference in children’s behavior at school. This is the finding of a study conducted by researchers from McGill University, Montreal, Canada, reported in the journal Pediatrics.

The study authors found that children who slept an extra 27 minutes on school nights, were less restless, less impulsive and more emotionally stable.

The research was conducted on children between the ages of 7 and 11 by Reut Gruber, PhD. and team. They divided 34 children into two groups with one group sleeping one hour more than usual for five nights and the other group sleeping one hour less for five nights. The kids were not allowed to take day time naps and none of them had any sleep, academic or behavioral problems.

The researchers found that the group of kids that slept the extra hour actually had exactly 27 minutes of additional peaceful sleep. Likewise, the other group had exactly 54 minutes of less sleep than the average 9.4 hours of sleep at night.

The children who slept less were much sleepier during the daytime than they were before the study. But their quality of sleep improved as their sleep fragmentation, reduced. The behavior problems of these children increased though as observed by their teachers who were not aware of the sleep experiment.

The authors said, “A modest extension in sleep duration was associated with significant improvement in alertness and emotional regulation, whereas a modest sleep restriction had opposite effects.”

In another Australian study it has been found that children lost an average of .073 minutes per year of sleep from 1897 to 2009. Sleep deprivation has become a major problem in recent years among children as well as adults.

A growing reason for disturbed sleep has also been attributed to the electronic equipment that is frequently used. A study published in Applied Ergonomics revealed that the self luminous backlight that is present in many screens affected the evening melatonin and delayed sleep especially in teenagers. Many other studies have shown that 43% of boys aged from 10 to 11 years do not get the recommended amount of sleep each night and majority are not in bed by 9 pm.

Dr. Gruber said that prior studies have concentrated on the academic performance of the kids because of sleep depravity but not on their behavioral performances.

He says in the published study,

“Healthy sleep is essential for supporting alertness and other key functional domains required for academic success. Sleep must be prioritized, and sleep problems must be eliminated.”

There have been many other studies that have related various physical and mental problems associated with sleep deprivation in adults and children. A study done by Columbia University found that sleep problems are much more common in urban children than previously thought. Also according to research by Auburn University, elementary school going children from low income families who sleep less are much more vulnerable to sleep related problems than other kids.

Researchers from the Autism Speaks’ Autism Treatment Network also found that children with autism who are affected by sleep disturbances tend to show more behavioral problems. Second hand smoking has also been associated with sleep problems among kids.

But what is good to know is that a mere 27 minutes of extra sleep time can change a child’s school hours from dreary to fun.