Several studies have suggested that regular exposure to a dog early in life could carry some benefits, some showing a lower risk of developing asthma and allergies in children. Now, a study from the University of California-San Francisco (UCSF) and the University of Michigan has gone even further, showing that exposure to a dog early in life actually changes microbes found within the gut. 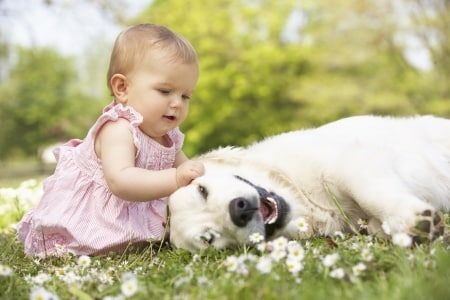 While the studies are still out on the exact benefits of gut bacteria (otherwise known as flora or microbes), some studies have linked a healthy gut to many different health benefits, including a better immune system. This is where allergies and asthma (both considered autoimmune disorders) come in.

Researchers on the study, which was published in the journal Proceedings of the National Academy of Sciences, exposed mice to dust from two different types of houses: those with dogs and those without. Researchers also analyzed the community of microbes in the intestines of those mice before and after exposure.

According to researchers, the gastrointestinal microbiome within the mice actually changed, or “reshaped” after exposure to dust from houses with dogs. Researchers then introduced common allergens, and cockroach or protein allergens that typically cause an inflammatory response, to the mice. Surprisingly enough, researchers say there was a decreased reactivity by the immune system to both types of allergens in the mice that had been exposed to dust from homes with dogs.

Specifically, researchers singled out the bacteria species called Lactobacillus johnsonil. When this bacteria was fed to the mice, researchers found that it prevented inflammation often attributed to allergens and respiratory syncytial virus (RSV), which is linked to an elevated risk of asthma later on in life.

However, study leader Professor Susan Lynch, from the Division of Gastroenterology at UCSF, said that the level of protection that Lactobacillus johnsonil by itself is less effective than the full dust microbe selection found in homes where dogs are present. For this reason, she believes that other bacterial species are needed to provide full protection in the airway. Additionally, Prof. Lynch said she is convinced that “the composition and function in the gut microbiome strongly influence immune reactions and present a novel avenue for development of therapeutics for both allergic asthma and a range of other diseases.”

The study authors also said that the findings may explain why children that are raised in homes with dogs from birth are less likely to have allergies as children and adults. They added that this may leave some future potential for future studies.