Being a parent is the most rewarding job in the entire world. But according to a new study, it’s also the more exhausting! Can you relate? I know I can! 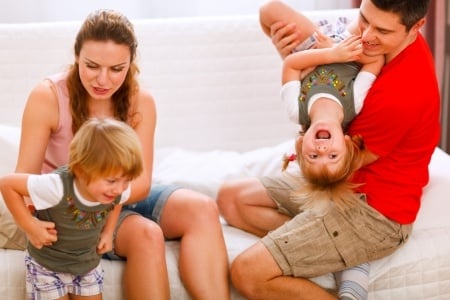 Based on an analysis of information gathered by the Bureau of Labor Statistics in a 2010 American Time Use Survey, the information asked respondents to answer questions via a “time diary.” The diary helped gauge how each person’s time was spent, and how they felt about it at that time.

“This is an objective measure,” Wendy Wang, the Pew researchers who wrote the report told Reuter’s Health. “It does capture the exact feeling that parents experience in these different types of daily activities.”

“It’s so true; just managing the kids’ schedule is exhausting,” Jennifer Davidson Patykiewicz, a 36-year-old mother of three (ages 3, 7 and 9) from Kansas City told Reuters. Jennifer worked for seven years as a pharmacist, but ended up leaving her job in September to care for her children full-time. Now she spends her day transporting children, cleaning her home, and helping with homework. “It’s definitely more rewarding for sure, but also more of a challenge.”

And for mothers like Jennifer, the challenge may be a bit more than what full-time fathers face, the Pew report suggests. Mothers reported feeling greater levels of exhaustion than fathers. And, when looking at specific activities, it seems that mothers allocate their time differently than dads. For example, mothers spent more time doing housework than dads (31 hours per week versus 17 hours) and had fewer hours of leisure time (3 hours more per week for dads than moms). It all comes down to one conclusion, Wang says.

But, interestingly enough, there was one area where there didn’t seem to be anywhere near the gap in time spent: actual time interacting with the children. Both parents spent about the same amount of time playing with their children and about two hours per week in recreational-type childcare activities. Now THAT is something we can definitely feel good about, and it’s just one of those activities that makes all that work so wonderfully worth it. Wouldn’t you agree?