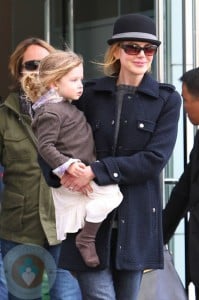 Nicole Kidman couldn’t be happier with her life right now. On Thursday night her latest film Rabbit Hole premiered in NYC and there is already Oscar buzz surrounding both the film and Nicole.

While promoting the film the actress revealed that her daughter, 2-year-old Sunday Rose, may already well on her way to becoming her own star!

At home the toddler sings and dances and according to her proud parents she has a group of thirty songs she can sing very well. Are they biased? Maybe, but who isn’t?

“[Keith] was actually playing the piano just before we left, and Sunday Rose was dancing around the living room. She sings incessantly. She has a repertoire of about 30 songs: ‘The ABC Song,’ ‘Twinkle, Twinkle, Traffic Light,’ ‘So Long, Farewell’ – she was singing that as I left the house.”

Sounds like we have a future Hollywood star in the making! The question is – will she follow in daddy’s footsteps or mommy’s? Check back in 16 years!