Home » Survey: Ten Percent of Parents are Delaying or Skipping Vaccinations for Their Children 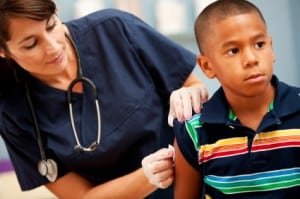 A nationwide survey indicates that ten percent of American parents are deviating from the recommended vaccination schedule, by delaying shots for their children, or skipping them altogether.

There is a lot of misinformation floating around that has lead to widespread distrust of the vaccination schedule that has been implemented by the U.S. Centers for Disease Control and Prevention.

Parents worry about side effects and believe that delaying immunisations will reduce the risk of negative outcomes.

The MMR (measles, mumps and rubella) shot, in particular, because of its now refuted link with autism, is the most commonly delayed vaccination.  Parents often put it off until their child is past the two to four year hurdle, when most cases of autism present themselves.

There are also indications that many parents feel that some immunisations are unnecessary, altogether.

Dr. Paul Offit, Chief of Infectious Diseases at the Children’s Hospital of Philadelphia, wants to get the message out to parents that; vaccines are safe, side effects are rare and delay of immunisation does not prevent side effects from occurring.

“What do you get for delaying it?  Nothing.” Offit says.

The survey results point out that 81 percent of parents who skip or delay vaccinations do not “agree” that leaving children unvaccinated puts them and their community at risk for disease.

Offit points out that vaccination schedules have been developed based on safety data taken from clinical trials of the actual vaccines.

The study’s lead author, Dr. Amanda Dempsey, believes that parents’ experiences with diseases motivate their decisions.  She points out that parents most often skip the flu shot and the chicken pox vaccine.

“Most people of parenting age today have had chicken pox or have had at least something they thought was the flu,” and they came through unscathed.

But there are occasions when these illnesses take a serious turn and result in time spent in the hospital.  They can even become life threatening.

Other vaccines seem unnecessary because they work so well, and the illnesses they protect against are practically erased from memory.

“When you increase coverage of vaccines, the rates of those diseases start going down,” according to Dr. Saad Omer, assistant professor of Global Health, Epidemiology and Pediatrics at Emory University.

As a result, most parents have no memory of seeing someone struggle with the disease while, “at the same time, people start hearing more about the real or perceived vaccine adverse events,” Omer says.

In these cases, parents can end up being more afraid of the vaccine than the disease.

The American Academy of Pediatrics has come out with an official response to parents requesting to delay or skip a vaccination.

According to Dempsey, the AAP recommends doctors, “work with families,” rather than “fire them from our clinics.”

“Although it would be ideal to get all the vaccines, it’s better to get some in and not to alienate the family completely.”

This position leaves room for the issue to persist into the future, however.  Offit points out that, “When you say, OK, we’ll do it your way, there’s a tacit agreement that you are right.”

“Overall,” Dempsey says, “what our study showed to me is that this problem is not going to go away soon, and it’s likely going to get worse due to people’s tenuous attitudes toward vaccines.”