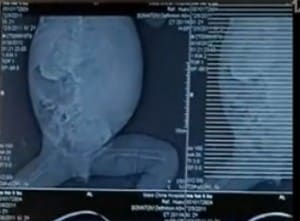 Surgeons in China have successfully removed a parasitic twin from a two-year-old boy when scans revealed he was carrying an undeveloped fetus inside his stomach.

Xiao Feng was rushed to the operating room after he arrived at the hospital with a severely bloated stomach.

Doctors say the unborn fetus, which measured 20cm in width, took up two thirds of Xiao’s stomach, with caused breathing difficulties for the toddler.

The fetus was also significantly formed with a spine and limbs, as well as fingers and toes. 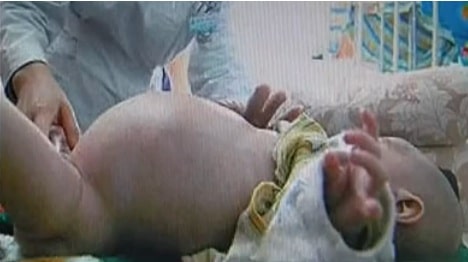 Identical twins occur when one egg splits and creates two embryos.  On some occasions the egg doesn’t split fully and the twins become conjoined.

In Xiao’s case,  one embryo maintained dominant development, causing a Fetus in fetu in which ‘a mass of tissue resembling a fetus forms inside the body.’

Very early in a monozygotic twin pregnancy, in which both fetuses share a common placenta, one fetus wraps around and envelops the other. The enveloped twin becomes a parasite, in that his or her survival depends on the survival of his or her host twin, by drawing on the host twin’s blood supply. The parasitic twin is anencephalic (without a brain) and lacks some internal organs, and as such is almost always unable to survive on its own.

Thankfully the twin was able to be removed.  The medical team believes that it would have killed Xiao if it hadn’t been detected.