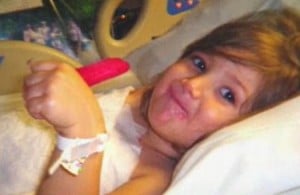 No one ever wants to be told they have breast cancer.  Just imagine being given that diagnosis for your toddler.  That was the situation, two years ago, when Melanie Hunter was informed that her daughter had juvenile breast carcinoma.

Every year, more than 200,000 women develop breast cancer, but most are over the age of 50.  In fact, age is one of the leading risk factors for the disease.  Juvenile breast carcinoma is very rare and when it does occur, it usually strikes girls in their teen years.  It is very unusual to see breast cancer develop in a two and a half-year-old.

But, that was Aleisha’s plight and so, six months ago, she underwent a radical modified mastectomy.  Doctors removed all of her breast tissue, as well as the lymph nodes under her arm.  She will need reconstructive surgery when she gets older, but right now she is in remission and her prognosis is good.

Nancy Down is a surgical oncologist at North York General Hospital in Ontario, Canada.  She performed the surgery on Aleisha and says, “You can see this type of breast cancer in adults, but it is one of the more rare types of breast cancer.  This one tends to be slower growing, tends not to spread as aggressively, and the outlook is good.”

Dr. Rachel Egler, a pediatric oncologist at Rainbow Babies & Children’s Hospital in Cleveland, told AOL Health, “It’s hard to imagine a mastectomy in a 3-year-old, but these are definitely treated with surgery.  In terms of doing a complete mastectomy, I suspect that it comes from the fact that there’s so little breast tissue in a 3-year-old that it might have been the default.”

But, Dr. Egler believes it is encouraging that the tumour was surgically removed, “Most won’t come back.  The survival rate is 70 to 80 percent.” 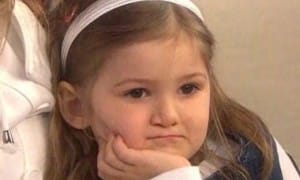 Aleisha, now 4-years-old, had her mom and favourite Teddy bear by her hospital bed throughout her ordeal.

Aleisha is back where she belongs now.  She’s in preschool, playing with her friends and learning her letters and numbers; living life like any other 4-year-old.  That’s just as it should be.  – Jen R, Staff Writer