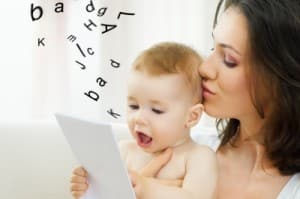 Want to increase your toddler’s vocabulary? A new study suggests that the best thing you can do is let them learn new words themselves through context clues.

“One of the big questions that adults have is how kids learn new words,” lead study author Jennifer Zosh, a developmental psychologist at Penn State Brandywine, told LiveScience. “What I was really interested in are the circumstances in which kids learn new words better.”

Zosh and her colleagues from the university studied the word development of 48 children between the ages of 3 and 3 ½, all of them spoke primarily English. All of the children were shown pictures of both familiar and unfamiliar objects on the screen. Some of them were taught made-up words for the unfamiliar objects by instruction (being told what the item was) and others learned by inference (using what they already knew to distinguish what the unknown word referred to). Researchers then performed testing to determine how well the children remembered the new word. Four of the six new items were presented to the children. Researchers asked them to point to the objects by name. Time examining each object was also recorded.

Not everyone is surprised by the findings, however.

“When children are learning new words and categories, it’s important not only to learn what something is, but what it is not,” Jessica Horst, developmental psychologist of the University of Sussex in England, who was not involved in the study told LiveScience.

LiveScience gave the example that, if a child is asked to get the remote, but doesn’t know what the word is, the child will automatically know what the item is if there is nothing else on the table. If, however, there are other items on the table that the child knows the name of, he or she will have to learn what the remote is by using a process of elimination. The latter would produce better language retention. Unfortunately, parents do have to find the right time and place for such teaching instances.

“Finding the sweet spot is a challenge,” Zosh said, adding that you need to give children enough challenge that they stay interested and engaged without giving them so much that it’s too difficult for them. It’s also worth noting that Zosh said that inference isn’t the only way that children learn new words; it’s simply likely that they’re more engaged when learning is more of a game to them.

Zosh and her colleagues plan to do a follow-up study on this one. They’d like to find out if younger children find inference more of a challenge, or if they also learn new words better this way.