It has been a busy year for the designers at Fisher-Price.  While at Toy Fair earlier this week I toured their showroom and am excited about all of the new products that will be hitting shelves this Summer and Fall.

For little ones 6 months+ Fisher-Price will be introducing some new toys into their popular Laugh N Learn collection. This Summer the toy giant will debut Singin’ Storytime Puppy, Love to Play Sis, Puppy & Friends Learning Table and a favorite of mine the Laugh & Learn Crawl Around Car. 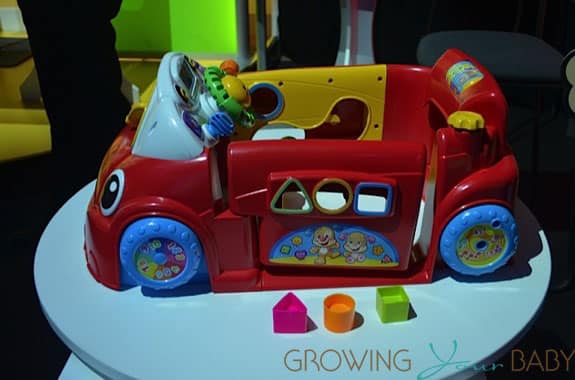 The Laugh & Learn Crawl Around Car puts babies in the driver seat of a fun- filled learning vehicle just their size. The interactive lights and sounds dashboard will take baby on fun learning adventures. With over 50 sung songs, tunes and phrases and three modes of play: 1) Learning, 2) Music, and 3) Imagination, baby will learn ABCs, numbers, colors, opposites, greetings and more. Learn about colors and letters by turning the steering wheel. Turn the key or open/close the door to learn opposites, and press the horn for realistic sounds. Playing the radio teaches baby the ABCs. 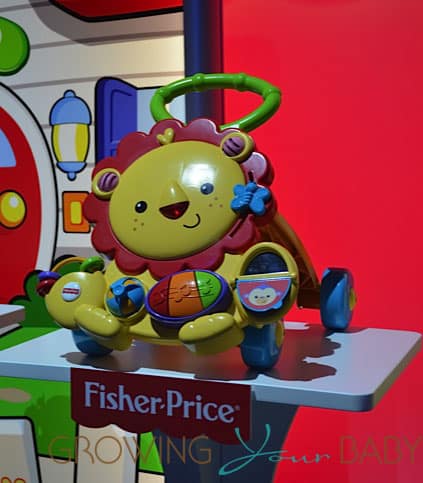 New for 2013 Fisher-Price has a whole slew of licenced Imaginext toys coming out like the Superman Playset and Monster Inc Playset. They will also debut the Imaginext® Rescue City Center, which features the “Action TechTM” Technology that enables this playset to magically recognize and respond to other accessories. 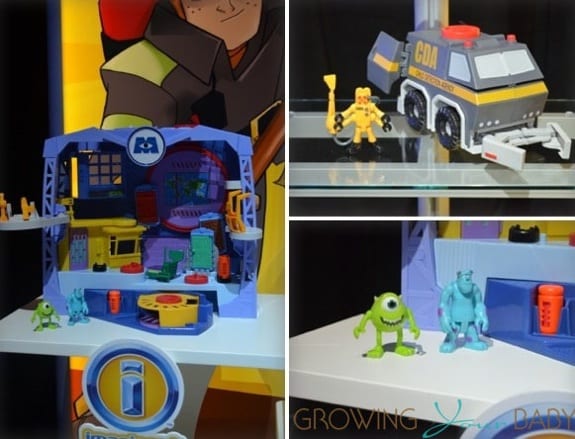 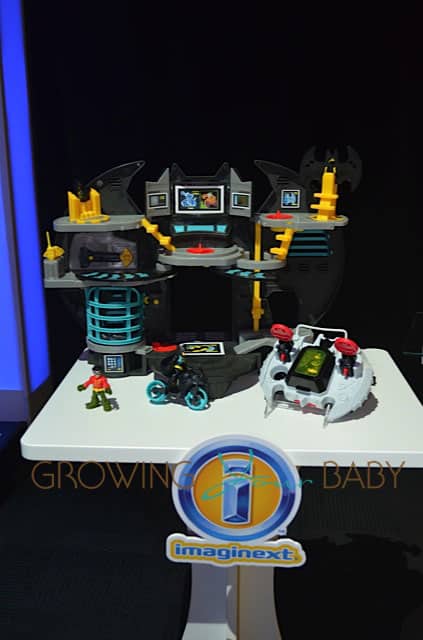 This year Fisher-Price has re-designed their Little People collection and introduced some new characters. When they are available in June, parents will also notice the characters are slimmer than the ones that are currently on the market. The notch underneath will stay the same so that the new figures will still be compatible with existing sets. 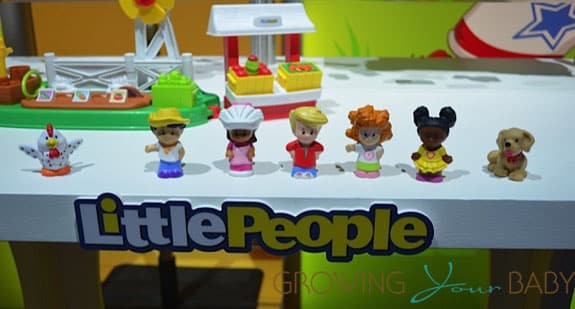 A new version of the Fun Sounds Farm will go on sale this June, as will an all new Happy Sounds Home. 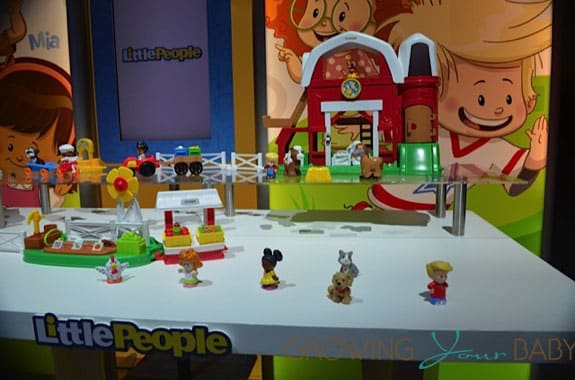 The Disney Princess Klip Klop Stable is a detailed playset that brings the horses of the Disney Princesses to life. Watch as you place any of the horses on the ramps they magically “klip klop” or trot down the ramp to their next destination. There are two Royal destinations a Tower and Stable. On the three tiered tower side there is a vanity, library and kitchen. As the horse trots to the Royal Stable, there is a balcony to overlook the grounds, and then you can slide down to get to the ground level of the Royal Stable. There are two stalls, and as you open the two stall doors, the horse will magically klip klop out. There is also a door in the center for a grand entrance that activates fun sounds. 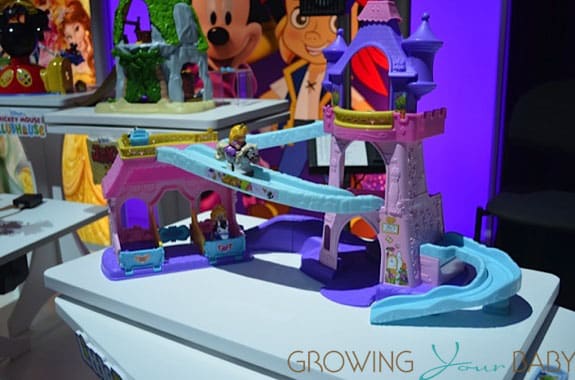 Fisher-Price has teamed up with Nickelodeon to create the playsets for of their popular shows. 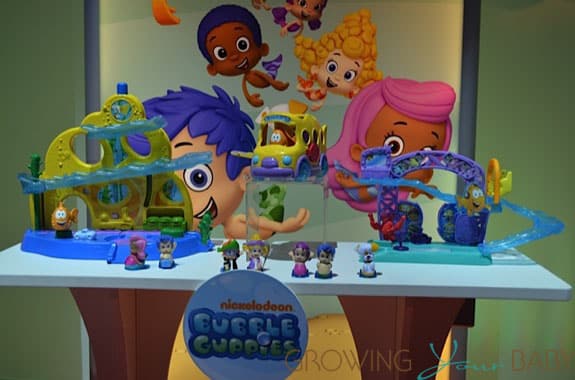 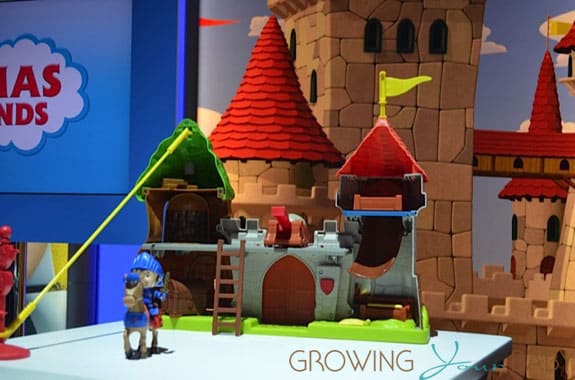 To support the new Thomas & Friends movie, “King of the Railway”, Fisher-Price has created a Trackmaster set that re-creates a very important part of the movie.

Sir Robert Norramby, the Earl of Sodor, returns to restore Ulfstead Castle. Thomas discovers mysteries of the past and must help a new friend, save a ruined castle, and may even find a treasure when the Earl comes to the Sodor. Stephen will get lost in a mine while looking for a missing crown and Thomas will save him.

And we have a quick video showing the set in action:

With the recent explosion of tech toys and apps, Fisher-Price has expanded their Apptivity line significantly.

For kids 3+ Fisher-Price will be introducing a Create & Learn Case for iPad® ($39.99)that has an awesome app to help teach pre-schoolers the basics. Designed to work with the first, second and third-generation iPad®, as well as new iPad with Retina display, the Create and Learn Case with attached stylus protects your iPad from spills and bumps while your child draws and plays or download the free Create and Learn app available on the App Store for kids to learn, explore and create with animated content and music. The learn feature allows the child to scroll through the alphabet and practice writing upper case and lower case letters in fun writing fonts. The explore feature allows the child to watch and interact with pictures on the included Alphabet Animation cards as they come to life in 3D on the iPad screen when seen by the iPad’s camera. And the create feature allows the child to engage in 26 art activities and open-ended drawing and stamping play. Available Fall 2013. 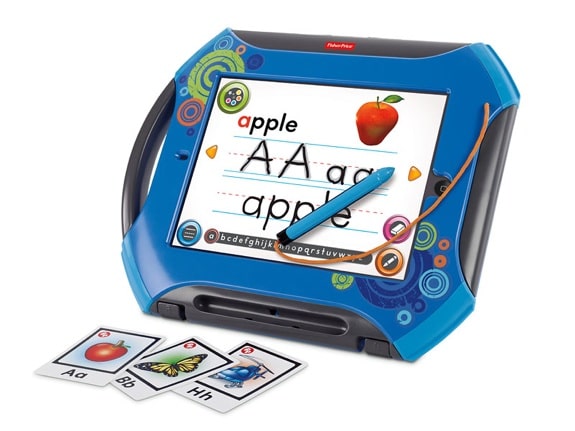 For babies 9 months+ there will be a Laugh & Learn Apptivity Creation Center that will allow babies to use the four Smart Shape Stampers to explore, learn and interact with their favorite Laugh & Learn characters. 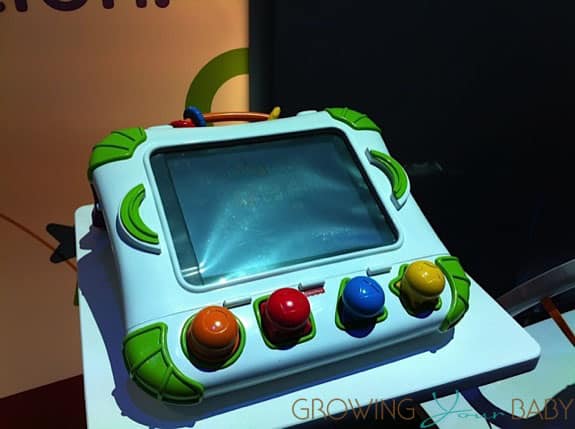 One of my favorite toys from their whole collection is the Imaginext® Apptivity Fortress. Compatible with iPad generations 1, 2, 3, 4 as well as the iPad® Mini, this fortress combines playset and app play all in one, giving children 3-7 endless possibilities for adventures, activities and games around the fortress theme. Parents can download the free Imaginext Fortress app available on the App Storesm and then slide iPad® into the clear screen in the playset that protects iPad while children play. When using the app with the Imaginext Apptivity Fortress playset, iPad recognizes and interacts with the knight figure and cannon with animated content in both vertical and horizontal modes. When iPad is in the vertical/upright position, children can play games or interact with animated backgrounds including the Great Hall and other rooms within the fortress. Children can touch an on-screen button to activate the iPad’s camera function and watch interactive enemies such as trolls and evil knights run towards them, as if they were in their living room. Children can also attach the repositionable cannon to the drawbridge and aim it towards the screen to fire virtual cannon balls at the approaching enemies. In the horizontal/flat position, children can play additional games that take place outside the Fortress and throughout the Imaginext Kingdom, including a flying game, quest, head-to-head combat, and adventure games. When it is introduced this Fall, this will be a HOT toy. 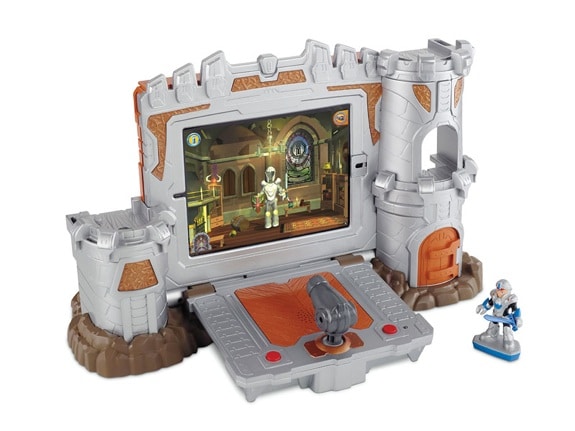 I was able to get a video demo while touring Fisher-Price’s showroom, but there is a bit of background noise as the room was full of media and buyers.

There are more pictures in the Gallery of some of the other new products coming this year like the Disney Princess Mansion and a Sofia the First Doll.