Corey Arnett, a 12 year-old from Utah, is being hailed as a hero after he survived a fatal car crash and rescued three small toddlers still trapped inside. 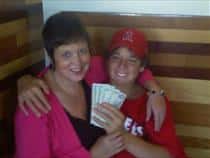 Corey was one of five passengers inside the SUV when it crashed. The driver, Beth Donnelly, had fallen asleep at the wheel and crashed, killing her instantly and knocking him unconscious. When he awoke to the sound of crying, the preteen acted quickly to save the three toddlers that were riding with him.

Arnett says, “All I remember is the car fishtailing and hitting the trees over the bank and then it just all went blank.” He goes on, “The next thing I remember was waking up and hearing crying.”

After escaping the crash and helping the three small toddlers to the road, Corey then walked a mile and half to find help. He placed the toddlers under a tree to keep them in the shade, then ran further down the road to get the attention of people that could help.

He remembers, “Once I saw those people I knew, I was like. ‘Ok I got them to safety that’s what I needed to do.’

Locals are calling him a hero for his swift thinking and bravery after such an ordeal. Corey says he was just doing the right thing. – Summer, Staff Writer