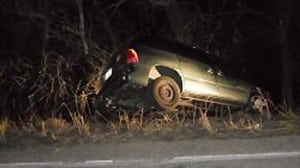 While most little kids were sleeping in their beds safely, an 8-year-old boy decided to take a joyride with his 5-year-old sister in their mother’s minivan. According to the boy, his sister wanted to go to the grocery store and being the good big brother he was, he took his mother’s keys, buckled his sister in and headed off.

Thankfully, they didn’t get very far and no one was injured in the late-night trip last night. Unable to see over the steering wheel, the mini driver only made it a few hundred feet before crashing the vehicle into a line of trees along the Ogden Rivers.

“They had just come out of the driveway, went across both lanes, then hit those trees,” stated Ogden police officer Lt. Danielle Croyle. “It could have been much worse if they didn’t have their seatbelts on. They were just too smart for their own good.”

Justin McDonald, 18, heard the crash and ran outside with a friend to see what had happened.

“It was crazy,” McDonald stated. “They looked a little freaked out. The kids just kept saying they were happy to be alive. I said, ‘Where’s your mommy and daddy? Are they still in the car?’ But she was at home asleep.”

Another neighbor, Holly Maxwell, 25, also heard the crash and ran out to help.

“The kid wasn’t even tall enough to see above the steering wheel,” Maxwell said. “They were worried their mother was going to be mad at them.”

Ms. Maxwell held the 5-year-old’s hand until authorities arrived and both McDonald and Maxwell accompanied officers to the children’s house. When the officers arrived at the home, they knocked several times, but no one answered. Finally, they just walked into the apartment. McDonald said that, once in the apartment, the officer “called her name like four or five times.” Finally, she emerged from a back room and found her apartment full of police officers.

McDonald said the officer then asked the mother, “Did you know your kids took a joyride in your car?”

McDonald then said the mother “just rubbed her head.”

Authorities did not identify the mother or the children. No charges of neglect are being made and the incident is being deemed “an accident.”