Molly Gibson is just one month old, but her birth is incredible for so many reasons.

After years of struggling with infertility Tina and Ben Gibson turned to embryo adoption on 2017.

Created for in vitro fertilization for someone else, embryos are left in frozen storage and sometimes available to others who are unable to naturally conceive a child. These embryos are called “snowbabies” and stored in icy suspension as potential lives waiting to be born. 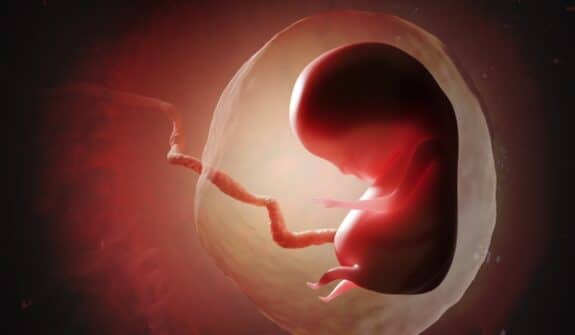 After research, the couple adopted a total of five sibling embryos from the same egg donor.  That year three were transferred, one developed into a beautiful baby girl named Emma.  At the time, she set the previous record for the longest-frozen embryo known to have resulted in a birth – 24 years.

In February, Molly’s embryo was thawed and transferred to Tina’s uterus. The pair learned just before the pandemic shut down the world they were expecting again.

Born at the end of October at six pounds, 13 ounces, Molly broke Emma’s record for longest-frozen embryo know to have resulted in birth – 27 years!

Thrilled, Ben and Tina were overjoyed to become parents again.

“This definitely reflects on the technology used all those years ago and its ability to preserve the embryos for future use under an indefinite time frame,” said Carol Sommerfelt, the center’s lab director and embryologist, in a release.