Home » Baby Number 19 On The Way For Tennessee Family! 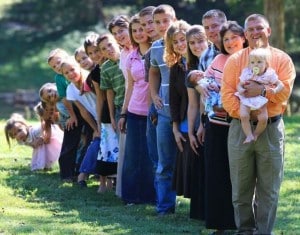 The children in the Bates family it seems will never lack playmates and baby cries, diapers, feeding bottles are a constant part of their lives. That’s because while Kelly and Gil Bates are already mom and dad to 18 children they are preparing to welcome baby number 19.

The couple, from Tennessee, are evangelical Christians and do not believe in birth control. That is why they were thrilled to know that Kelly is expecting again and baby number 19 is due near to Valentine ’s Day next year.

While being filmed by ABC news, the couple was shown going through an ultrasound to confirm the pregnancy. Kelly was taking hormones to help her carry the baby after she suffered three miscarriages.

Presently the children range from 22 year old Zach to 11 month old Judson and the younger children are home schooled by their mother.

44 year old Kelly has undoubtedly spent all her adult life being pregnant and despite her age looks young.

She says, ‘It feels more normal to me to be pregnant than not be pregnant. I’m happy holding a baby.’

But baby number 19 will not be the last to join the herd as the couple feels they would ultimately wish to have an even number of boys and girls with ten boys and ten girls. This would make them the largest American family, a title currently held by the Duggar family who are friends with the Bates.

Kelly and Gil do not believe in birth control but they are using hormones to have children despite the fact that their youngest 10 children are not insured.

‘We just want to trust God, But at the same time, if there’s already a life living, we don’t want to deny medical help to a baby that’s in trouble,’ says Kelly.

The family lives in a five bedroom house which Gil, a tree surgeon is planning to extend. They own five washing machines and four dryers. They also shop at the supermarket every other day with the bill amounting to $250 on an average for each visit. They have two family vans but not a TV as they prefer to play family games instead.

‘We were told that having a house full of children would result in a ruined marriage, a frazzled and worn mom, a frustrated dad, and unhappy children. On the contrary, the children keep us feeling young and the responsibilities have driven us to more committed and meaningful relationships.

‘We were told having a large family would send us to the poor house. Well, great expenses are required and that has increased our faith all the more. It has also taught us contentment and gratitude. We realize that having food, clothes, and living in America – no matter what our tax bracket might be – already makes us richer than most who live in the world..”