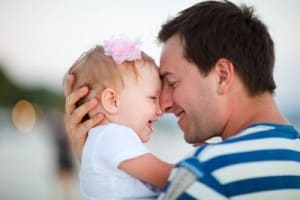 A study published in the journal Cognitive Science took a look at just how well toddlers understand what they hear.  What they found just might change the way you talk to your toddler.

Caroline Rowland of the University of Liverpool’s Child Language Study Center provided a group of two-year-olds with a set of cartoon pictures. They asked the toddlers to match the pictures to made-up verbs.

“One picture was the rabbit acting on the duck, lifting the duck’s leg, for example , and the other was an image of the animals acting independently, such as swinging a leg,” stated Rowland. “We then played sentences with made-up verbs – the rabbit is glorping the duck – over a loudspeaker and asked them to point to the picture. They picked out the correct image more often than we would expect them to by chance.”

What does this mean exactly? According to Rowland, “infants are sensitive to the different meanings produced by particular grammatical construction, even if they can’t articulate words properly.” In short, toddlers can make sense of complex sentences, using the words they do understand. It also means that a toddler’s vocabulary is not an indicator of how much they are able to understand.

“The beginnings of grammar acquisition start much earlier than previously thought, but more importantly, it demonstrates that children can use grammar to help them work out the meaning of new words, particularly those that don’t correspond to concrete objects such as ‘know’ and ‘love,’” Rowland stated. “Children can use the grammar of [a] sentence to narrow down possible meanings, making it much easier for them to learn.”

In other words, don’t be afraid to use big words and complex sentences with your toddler. Chances are, they will understand what you are saying and their language skills will develop accordingly.