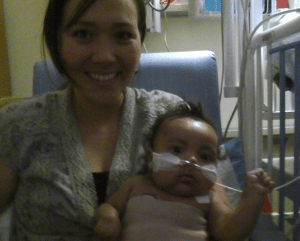 Baby Audrey MacIvor appeared to be a healthy baby until tests revealed something was not right with her heart. The baby needed a heart transplant immediately and seeing her struggle to survive each day, doctors took the radical decision of buying time for her by giving a Berlin heart.

Audrey’s parents her taken her for her two month check up and she seemed fine. Then the baby began wheezing and coughing and just to be sure they took her to Stanford Medical Center in Palo, CA. The test results showed that their baby girl had dilated cardiomyopathy (DCM), a condition when the heart muscles become weak and enlarged and cannot pump blood.

It was then that doctors revealed that Audrey needed a heart transplant.

To help her in the meantime the doctors places the baby on a heart-lung treatment called Extra Corporeal Membrane Oxygenation (ECMO).

But the situation began to worsen for Audrey. Her body stopped functioning and doctors said she was “unable to eat and lethargic”. She was on a breathing machine and the doctors gave her medicine to keep her still. They feared even moving around could be risky for her.

Audrey was sent to Lucile Packard Children’s Hospital in Palo Alto, CA. She was becoming weak and that meant that she would not be able to be fit even for a transplant procedure. Her transplant waiting list was 100 days or longer and that is when doctors decided to try a new approach to give the baby some more time. They decided to give her a Berlin heart, a device that supports baby’s heart and makes sure that the blood is pumped though the body. It is not yet FDA approved but in Audrey’s case the doctor felt she needed the device to make it through until the eventual transplant.

Audrey was fitted with the Berlin heart last month. It was surgically implanted on her left ventricle. Doctors feel that she has shown amazing progress since the operation.

Dr. David Rosenthal of Lucile Packard Children’s Hospital says, “She’s out of the intensive care unit, and being taken care of in a regular hospital bed. Her mom can also hold her in her lap.”

“She’s kicking her legs, punching her arms out, and cooing to visitors.”

“She’s a very smart and strong girl. She’s a fighter, and we hope a heart transplant is coming soon.”

Till then the baby girl is getting stronger and fitter everyday thanks to her Berlin heart.