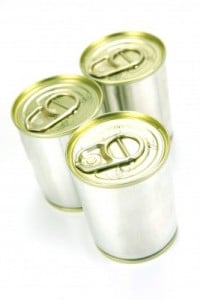 Exposure to Bisphenol A, otherwise known as BPA, has been linked to breast cancer, type-2 diabetes, infertility, ADHD, prostate cancer and early puberty in girls. There are some, however, that question the validity of the tests used to determine this claim. They state that humans are unlikely to experience any of these complications because it is unlikely that humans would ever be exposed to high enough levels of BPA.

Evidence, however, would indicate otherwise. BPA was found in most baby bottles and sippy cups. Just drinking out of these containers caused exposure. When heated, infants and toddlers experience even more exposure. Many companies moved towards BPA free bottles and sippy cups, but not all. Infants all over the country are still being exposed to BPA in their bottles and cups.

But the exposure for our children gets even worse. According to a study recently conducted by the Breast Cancer Fund, BPA was found in every canned food item they tested. All of the cans contained products that are marketed to…you guessed it – children.

Campbell’s Disney Princess and Toy Story soups were found to be the biggest offenders but even organic products like Annie’s Homegrown Cheesy Ravioli and Earth’s Best Organic Elmo Noodlemania Soup were found to have high levels of BPA. Surprisingly, Campbell’s Spaghettios with Meatballs had the least amount of BPA, 13 ppb, but even this amount is a cause for alarm.

In response to the test results, Policy Manager at the Breast Cancer Fund, Gretchen Lee Salter said, “In all of these products – but particularly in the Campbell’s Disney Princess and Toy Story soups – a child-sized serving could result in BPA exposure at a level of concern. Consider the number of servings of canned foods – soups, pastas, vegetables, fruits – that a child eats in a week, in a year, and then throughout her developing years, and you start to see the urgency of getting BPA out of food cans.”

Dr. Goodson, senior clinical research scientist and California Pacific Medical Research Institute and breast cancer surgeon was appalled by the results. “This report shows that we’re all part of a big experiment to see what BPA will do to our kids and us. We weren’t given any choice about being in this experiment and it’s time for that to change.”

Dr. Goodson, along with a team of researchers, just conducted a study last week that demonstrated that BPA can actually cause non-cancerous cells to survive and grow like cancer cells.

There may be inconsistency in the results and skeptics may not agree with the idea that BPA is harmful at low-level results but, are we really experiencing low-level results? And, even if we are, why is it okay to expose us and our children to low levels just because the data is inconsistent?  If BPA has even the potential to be harmful to us and our children, it should be banned from all items, especially items marketed to and for children.