Rush hour at Penn Station was more exciting than usual yesterday morning after a baby boy decided to make his appearance into the world. 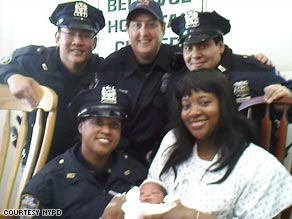 New mom Marie Boothe recalled the overwhelming moment during a press conference, “Forget the ambulance, forget everything else — I’m going to have the baby right here,”

Luckily for her, three members of the police department’s counter-terrorism patrol team who were in the station. Along with an Amtrak police officer, the 4 stepped in to help deliver the seven-pound baby boy under the departures sign at 7:20 a.m.

The newborn was greeted by fellow commuters in typical New York City fashion.

“They started yelling, ‘Name him Penn, after Penn Station!'” said Marie Medina, one of the NYPD officers who aided in the special delivery.

Caesar Penn Boothe, whose middle name reflects his birthplace, was taken to Bellevue Hospital along with his mother, and the two were reported to be doing well.