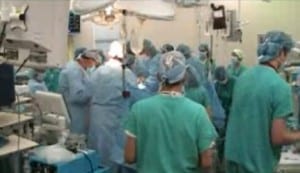 Proving their exceptional abilities a team of doctors from Omaha’s Nebraska Medical Centre performed a risky procedure to deliver a baby girl who was found to have a mouth tumor inside her mother’s womb.

When Megan Hanson was just 22 weeks pregnant, her routine ultrasound revealed that there was a mass close to the lips of the baby.

Doctors were concerned that the tumor could keep the baby from breathing on her own and so they started planning months in advance to work on a rare procedure called the EXIT or ex-utero intrapartum treatment to deliver the baby girl named Haylee.

“It was quite the pregnancy, go from excited that our baby’s finally going to be here, but yet scared to death because we don’t know what’s going to happen,” said Megan.

A team of 34 doctors and other medical personals performed a partial caesarean section and exposed the head of the baby while she was still attached to her mother’s umbilical cord and  her mother’s oxygen. Then the doctors established an airway for baby Haylee and completed the delivery.

“She’s still getting 100 percent of her support from mom, simply like she was 10 minutes ago, so that gives us time to get an airway and a safe way to make sure she’s getting oxygen,” said Dr. Ann Anderson-Berry, a neonatologist.

She added, “If she hadn’t been born under these controlled circumstances and there was a delay in getting the airway established, Haylee would have been at risk for things like cerebral palsy, developmental disorders, and possibly even death,” said Dr. Ann Anderson-Berry,

A day later, her benign tumor was removed. 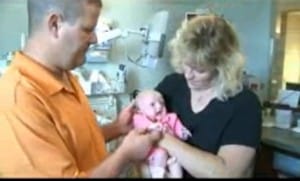 Says Dan Hanson the father of the miracle baby, “There were a lot of emotions, and also there was calmness about us that we were presented with, we have to thank the Lord above for that and confidence in all the doctors and the team that was around us.”

The baby girl will undergo more surgeries in the future to repair the roof of her mouth but right now the family is eager to take her home.

“We’re just anxious to get her home and start our complete family,” said Megan.

To date, there only have been a 100 cases of EXIT documented in the United States. – Atula, Staff Writer