Home » Doctors Perform Surgery On Newborn While She Is Being Delivered 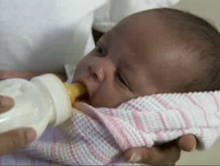 A West Virginia baby underwent a rare, life-saving surgery this week during her birth at The Ohio State University Medical Center.

According to a news release issued by the hospital, specialists performed the procedure on Janayah Campbell while the umbilical cord was still attached to her.

As she was being delivered, she developed a mass on her neck. The mass was big enough that it pushed on her throat and cut off oxygen.

The baby was delivered halfway, then stopped and put a small tube down her throat while they began an operation to improve oxygen flow.

“In a number of cases, it is advantageous for the baby if we can secure the baby’s airway (and) make sure the baby is able to take that first breath before we cut the umbilical cord,” said Dr. Richard O’Shaughnessy. 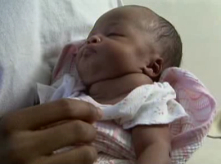 Today Janayah is home with her family, and while there is still a small mass on her neck, her mother said she is growing stronger every day.

She will need to undergo more surgeries in the future, but doctors said she should eventually only have a small scar where the mass was removed.