A 50 day old baby boy in India has puzzled every medical expert with his bizarre ‘burning’ phenomenon since birth. Baby Rahul’s parents claim that the infant ‘caught fire’ at least four times since he was born!

Baby Rahul was born in a small village in Villupuram district of Southern Indian state Tamil Nadu. His parents P Karna and Rajeshwari, are both agricultural labourers. 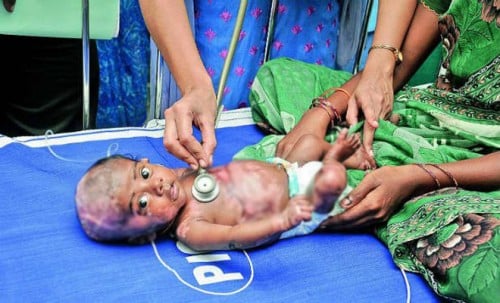 Rahul’s grandfather, V Perumal, 75, said his son and daughter-in-law, came to the village with the baby in the third week of July.

“My son said the baby caught fire twice when they were staying with Rajeshwari’s parents,” Perumal said. “I used to stay awake till 4am looking after the baby and then my wife would wake up and take over. One night, within three days of their visit, we heard the baby scream and we found a sheet near the baby on fire. Fire soon engulfed the baby’s head and neck. We doused it with water.”

The baby caught the villages attention when on 30th July the family’s small hut caught fire.

Panic stricken villagers with superstitious beliefs, asked the parents to move the baby boy to the temple thinking he was possessed with evil spirits.

“The villagers asked the parents to take the baby to a temple. None of the villagers gave us accommodation. We spent that night in the rain as the thatched roof was gutted,” said Rahul’s grandmother Ponamma.

Mother and the baby stayed at a nearby village temple till August 5th when officials in the district decided to move the baby to Chennai, the State capital, for better medical care.

But doctors at the Kilpauk Medical College and Hospital, who are treating the baby have yet to solve the mystery. Rahul has been admitted with burn injuries at the hospital.

“The baby is stable and treatment is on for burn injuries and scars. Life-saving support systems are there for Rahul in the intensive care unit,” said paediatrician Dr Narayana Babu.

The doctors say that the results of preliminary medical tests have shown no reason or abnormality for the baby to have recurring bouts of spontaneous combustion.

“We received some of the test results and the baby’s liver and kidneys seem to be fine. X-ray results show no damage to his bones,” said Dr. Babu.

The baby’s blood, urine and sweat samples are also being analysed to check for any toxic substance.

“We’ll get the results from a chromosome test by the end of the week,” he added.

The baby’s parents and his grandparents have also denied allegations of child abuse.

“How could we torture our grandson?” Ponamma asked. “The baby’s parents too would not do him any harm.”

The local cops add that they have not received any complaints of child abuse from villagers or authorities.

According to Babu, the baby has burn injuries in the abdomen and chest and the injuries are on the front of the body.

“We have only the mother’s version. The baby has to be carefully observed. We have to investigate whether the ailment is genetic. We will carry out tests to find out the kind of gases generated by the baby,” Jayachandran a professor in the department of pediatrics at KMC said.