Home » Four-Year-Old Has a Higher IQ than Carol Vorderman

Little Heidi Hankins may be just four years old, but her IQ already surpasses the Countdown presenter Carol Vorderman and falls just under Big Bang scientist Stephen Hawking, both of which are Mensa members; the largest and oldest high IQ society in the world. 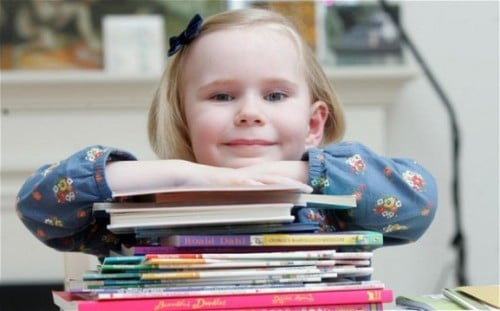 On average, adult IQs fall somewhere around the 100 range. “Gifted” individuals test at 130 or higher. Heidi surpasses both with a staggering 159.

Heidi’s father, Matthew, a University of Southampton public health lecturer, had always been curious about his daughter’s IQ.

“She was making noises and trying to talk, literally, since she was born,” Matthew said. “By age one, her vocabulary was quite good. Now it’s really good.”

Matthew decided very early on that Heidi needed a challenge, so he purchased some books for her to read at the ripe young age of two. Before he knew it, Heidi was reading at a seven-year-old level.

“I got her the complete set of the Oxford Reading Tree books when she was two and she read through the whole set of 30 in about an hour,” he said. “It’s what you would expect a seven-year-old to do.”

Once Heidi reached preschool, her school found that the activities they presented her with weren’t challenging enough. So, Heidi, who could already read, add, subtract and much more, underwent an IQ test.

Heidi’s father, while surprised by her actual score, wasn’t surprised to learn that he had a genius for a daughter.

“I was curious about her IQ,” he said. “Her results were off the scale.”

But Matthew says his daughter, while very intelligent, isn’t void of humor.

“The other day, I gave her mash and fishfingers for dinner – something quite boring – and her response was ‘that’s impressive’ so she has a sense of humor too,” he said, adding, “She is not precocious. She is just a little girl who likes her Barbies and Lego, but then you will find her sitting down and reading a book. We are really proud of her.”

Thanks to her high IQ test scores and her parent’s willingness to provide her with the intellectual stimulation she craves, Heidi is now a member of Mensa. John Stevenage, the chief executive of British Mensa had this to say about Heidi joining the elite group of geniuses:

“Heidi’s parents correctly identified that she shows great potential. We wish them well and are pleased that they have chosen to join the Mensa network for support.”