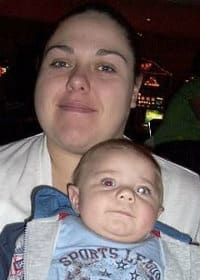 Like any family on a holiday, the Burden’s were busy clicking pictures of their baby boy Harry on his first vacation to Butlins holiday camps. But what the pictures later revealed was not just the images of a happy baby, but one who had a rare form of eye cancer.

Harry’s mother, Marie and dad Phil noticed a white halo on their baby’s pupil of in the holiday photos at the place where it should have been black. They were immediately concerned.

Marie remembered a newspaper article about a Florida girl who had a similar white spot in her eye. Her parents later found that the girl was suffering from a rare eye cancer.

Without taking any chances, the couple took Harry to a local hospital. The hospital staff asked the parents not to worry and not to believe everything that was published in the newspaper.

Phil and Marie were still not convinced. After taking Harry to several other doctors, they went to the Birmingham Children’s Hospital. Here too, after the initial check up,  the couple was told that Harry’s eyesight was perfect. But they also put the tiny baby on a six-week waiting list for him to visit the retinoplasty unit.

Marie recalls, “We did not want to wait that long. So I went to my GP, who referred us to the eye hospital in Wolverhampton. There, they finally dilated Harry’s pupils and discovered that he had small lesions in his left eye. They got us an appointment at the retinoplasty unit in Birmingham for the following week. Harry had tests done under general anaesthetic.”

“We were told that he had a rare cancer called retinoblastoma.”

Harry had four tumors in the retina of his left eye and one small tumor in his right eye. He was just 18 weeks old at the time.

The Burden’s were devasted but relieved that finally, their son would get the medical attention he needed.

Marie says, “As the tumours were in Harry’s pupil, the doctors couldn’t remove them – but they could try to clear them. Harry was so little to be going through all this treatment. But they say babies handle the medication better because, I suppose, they don’t know any different. All the way through Harry never showed any signs of discomfort – he just accepted everything, which made it easier for us.”

Harry was brought to the hospital every three weeks so that he could be examined. The treatment and the regular hospital trips carried on for two years.  Meanwhile the boy also had blood and platelet transfusions, because his platelet levels went low.

Although the treatment was progressing well, it was Harry’s right eye with the smaller tumor which was causing more trouble.

“We fought to save that eye, trying different operations and treatments. Great Ormond Street Hospital in London is the only other place that treats retinoblastoma. We also tried a new type of American chemo that is administered through a catheter in the groin and fed straight up to the ophthalmic artery in the back of the eye. It means it’s a stronger dose but it didn’t have any effect,” Marie said.

Tests also revealed that Harry had a faulty gene though his parents did not have that gene. There were 50-50 chances of Harry’s children inheriting this faulty gene. A geneticist also warned the couple that their eventual children might also carry the same gene. But thankfully, their younger son Roman is fine.

In January 2011 the family received more bad news. Doctors informed them that Harry’s right retina had detached and he had lost his vision. The consultant suggested that the little boy could be given an artificial eye.

“We had mixed emotions about this. We were devastated that Harry had to lose an eye, but happy that his other eye had remained stable,” says Marie.

Harry had to keep going to the hospital every two weeks for treatments and tests.

“On the morning of his surgery to remove his eye, I couldn’t stop crying. When he came back, he was drugged up and didn’t know what was going on. The staff had taken a photo of his remaining eye and sent it to Blackpool where the artificial eye was made and hand painted. It looks fantastic.”

The eye will stay in permanently, but will have to be replaced with a bigger one as Harry grows.

Harry is now learning to live with the eye.

Says his mother, “He doesn’t like anyone messing with him so we have to hold him down to take it out and put in another one, but it only takes five minutes. When the weather is cold, he does have quite a lot of discharge, but he’s fine otherwise, and it’s very rare for us to have to take it out.”

Although the Burdens have accepted the artificial eye and even named it as the magic eye, sometimes, Harry’s questions pain them,

“Sometimes he forgets it’s there, but other times I’m taken aback when he says ‘Mummy, can you fix my eye?’ and we have to say ‘No, we really can’t fix it’. He’s only four and doesn’t understand fully. “

Marie says that Harry is otherwise a very energetic kid who loves to play around with his younger brother and also loves to swim. The chlorine does not affect the artificial eye. She also says that looking at him it is not really easy to tell about his eye.

The worry now is for the left eye and also the time when Harry begins school and is proded by other kids.

“His other eye is a worry because you can never be 100 per cent certain it will remain stable but the longer it goes, the better it is,” says Marie. “Harry needs to have one more examination under general anaesthetic and if that goes well he can reduce the number of tests and just have them done with his pupils dilated in the future.”

Marie says she is glad she read the newspaper article that actually led her to discover her own son’s condition. There are only 40-50 children in the UK diagnosed with it.

“The halo of white in his eye was where you sometimes see red eyes in photos. The redness is the flash reflecting the blood vessels in the eye. In Harry’s eyes, the flash reflected the tumours, which were white. Retinoblastoma is a very aggressive form of cancer. It grows really quickly. If left, it might have spread to his spinal cord and into his brain.”

“It doesn’t bear thinking about what might have happened if we hadn’t sought treatment.That’s why raising awareness is the most important thing.”

The family made a trip to Florida recently on a Make a Wish trip and met the family of the little girl whose story had been published in the papers. The girl has also lost one of her eyes.

“It was amazing to be able to meet them and say thank you,” says Marie.