Home » Mother Struck By Train After Pushing Stroller to Safety

Susan Dibene, a 33-year-old mother from Riverside California, pushed her daughter’s stroller to safety before being struck and killed by a train on Saturday.  The accident serves as a tragic reminder to pedestrians to heed railway signals. 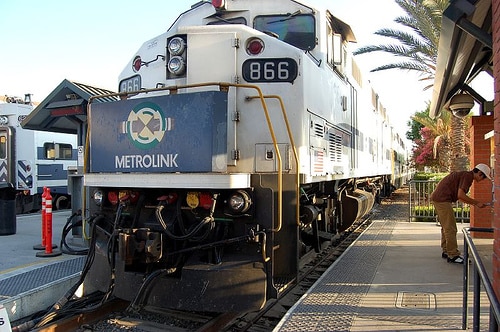 Susan was walking down the sidewalk, pushing her daughter’s stroller, Saturday evening, when she encountered the railway crossing.  The signals activated and the safety arm began to lower in preparation for an advancing Metrolink train.

Susan decided to take a chance and try to beat the train.

This particular rail crossing is just around the corner from her residence.  Her familiarity with the crossing may have increased her confidence that she would be able to negotiate the tracks in safety, despite the warning signals.

On this occasion, however, the stroller became lodged.  The train’s conductor and engineer saw Susan struggling to free her child’s stroller and applied the brake while blowing the train’s horn.

Susan dislodged the stroller and tried to complete her crossing, but the stroller became wedged a second time.

Again, she struggled to free her daughter’s stroller.  The conductor and engineer were unable to bring the train to a stop.  Susan succeeded in freeing the stroller with only enough time to push her two-year-old daughter to safety, before being struck down herself.

She was pronounced dead at the scene.  Her daughter, Paris Belle, was assessed at Riverside County Hospital.  She was uninjured and released to Susan’s mother, Donna Muraco.  The toddler is now with her father.

Donna describes her daughter as, “extremely giving,” and “very creative.”

“She was a wonderful mother,” Donna said.  “She saved her daughter’s life.”

Sadly, this tragedy could have been prevented.  Officials believe the decision to cross the tracks, against the signal, was an unnecessary risk that put Susan and her daughter in danger.

“She should never have put her child in harm’s way to begin with,” said Riverside Police Sgt. Skip Showalter

In only a moment, through one poor decision, a little girl will now grow up without her mother; a mother who clearly loved her very much.  It’s just not worth the risk. – Jen R, Staff Writer