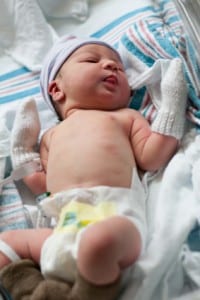 Researchers from the University of North Carolina, Chapel Hill, have recently discovered that the smoking habits of the baby’s mother can be determined by inspecting the baby’s Meconium.

Meconium is the first stool a baby produces right after being born. The stool is dark with the consistency of tar (sticky and heavy) and is usually passed by the baby within the first few minutes after birth. Meconium’s tarry consistency is a result of all the materials the infant ingested while in the womb.

The researchers hope to use this technique to also study levels of other environmental toxins infants can be exposed to while in the womb.

“Although meconium was not superior to serum as a biomarker of tobacco smoke exposure, it may be useful to estimate gestational exposure to other environmental toxicants that exhibit more variability during pregnancy, especially non-persistent compounds like Bisphenol A and Phthalates”.