13-month-old Evelyn Moore may not be the fastest kid in a wheelchair, but it’s possible that she’s the tiniest. Called Eva by her family, the little girl was diagnosed with cancer at her four-month check up. A nurse noticed too much movement in Eva’s hip and the doctor recognized a lump protruding from her spine.

Eva had a stage four neuroblastoma tumor that couldn’t be removed, so she endured eight rounds of chemotherapy. With her cancer in remission, her family received more bad news: their little girl was permanently paralyzed below her arms. 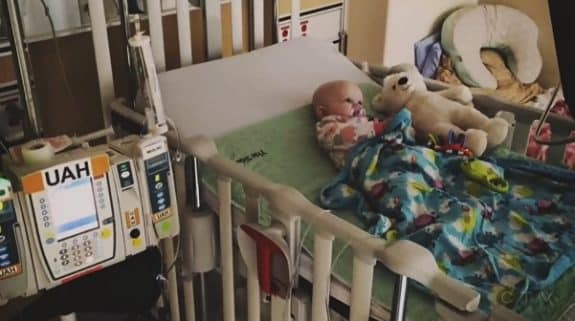 It was a heartbreaking diagnosis for her parents Kim and Brad Moore, who were told that eventually Evelyn would “army crawl” by pulling herself around by her arms, and that sometime after age two she might use a wheelchair. Kim says “that wasn’t a good enough answer for me.”

Looking for ways to help her daughter have some independence, Kim searched the internet and found photos of a do-it-yourself baby wheelchair. Dad Brad spent a night in his garage building it by attaching a second-hand Bumbo chair to a kitchen cutting board and putting casters on the bottom, then attaching small wheels from a child-sized bike on each side. 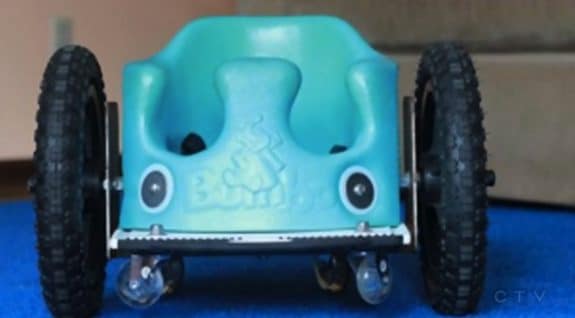 The project cost just $100 and was well worth the effort once Evelyn figured it out. One day dad nudged her down the driveway and she was able to stop herself. Now the little girl waves her arms in excitement when she’s about to be put in her chair, tilting it back and forth in glee. The chair gives her freedom to explore her environment in a way similar to that of other children who can crawl. 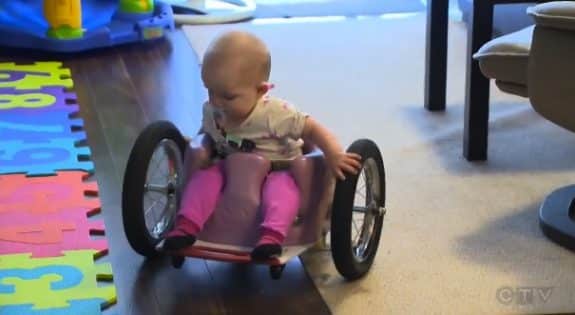 Pediatric oncologist Dr. Bev Wilson was amazed when Evelyn arrived at her office in the chair, bumping into staff to get their attention. Dr. Wilson says that the little girl was “turning around in circles and backing up.” The doctor had never before seen such a young child in a wheelchair.

Her proud parents are thrilled that Eva has shown such willpower and adapted so well to her situation. Dad wants her to grow up knowing that despite her physical limitations “she can do anything.”

As Evelyn gets bigger she’ll have to move to other chairs that will cost thousands of dollars. Her family is already preparing themselves for those bills, but for now they have the comfort of knowing that Evelyn has some independence.

Brad says “nothing can stop her.”