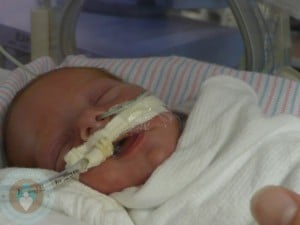 On March 2nd 2009 at 27 weeks and 4 days Melissa gave birth to Daphne Abigail and identical twin Leah. Sadly Leah had died in utero and minutes later Melissa had a crash c-section to save Daphne. They were monoamniotic twins (one placenta, one sac) and therefore very high risk. Melissa had been in hospital for continuous monitoring starting at 26 weeks.

Daphne weighed in at 980 grams and had a fairly long stay for a 28 weeker of five months.

She was born severely anemic. The blood loss after her placenta-sharing twin’s death resulted in acute kidney failure. In the first week or two mom and dad were given very little hope that she would survive.

Miraculously (her doctors words) her kidney function started to improve.

Melissa had learned through a fetal echo during pregnancy that one of the babies had a congenital heart defect called a VSD (ventricular septal defect- a hole in the wall separating the two lower chambers of the heart.) It ended up that it was Daphne. They also found out that she had an ASD as well (atrial septal defect- a hole in the wall between the right and left). The cardio team told mom and dad that the VSD was very large and would have to be corrected if she survived and grew big enough for surgery.

Daphne was on a ventilator for over two months. Doctors attempted to extubate her after she pulled out the tube, but she didn’t last. Finally, she was placed on CPAP for another month, then high and low flow oxygen and was discharged home on 0.1L of oxygen.

At only one month of age Daphne was diagnosed with BPD (bronchopulmonary dysplasia/chronic lung disease).

She struggled with persistent anemia, had countless blood transfusions, and at least two infection scares. In her last month at the NICU, she was diagnosed with pulmonary hypertension (high pressure of blood moving into the lungs), which is why she was discharged on oxygen. Daphne also had a heart catheterization (insertion of a catheter into a chamber or vessel of the heart) because of the PH.

Like many other babies who are born early, she also developed ROP (retinopathy of prematurity-a disease of the retina), but luckily did not require any intervention.

She tested hypothyroid (under active thyroid) on her newborn screening, so she has been on Synthroid since birth and will remain on it until age three. 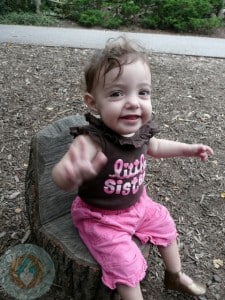 When Daphne came home there was a long list of medications that had to be given daily. Viagra for the PH, a diuretic, Synthroid, reflux medication and vitamins. Her heart defect was fixed at six months old with a very successful and uneventful open-heart surgery.

As for lasting effects from her prematurity, Daphne only has about 40-50% kidney function and will need to be followed by a nephrologist through her entire life. There are slight motor and cognitive delays and severe feeding issues. Daphne struggles with severe GERD (reflux) and vomits a lot. She is very small, even for her corrected age.

Daphne has an older sister Lucy who is four years old. Lucy was born at term. At the moment mom and dad are not sure that they would like more children as their hands are quite full.

I asked Melissa for one piece of advice she would give to a new preemie parent. She said,

Ask a lot of questions. Develop a good relationship with the NICU nurses – they can become your child’s greatest advocates. And take care of yourself.

When asked to describe Daphne in one word she said: RESILIANT