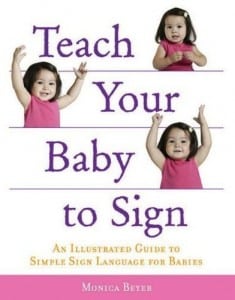 Parents who use sign language with their babies could drastically improve their vocabulary and language skills new research shows. Even babies that are not deaf can learn to communicate with their hands.

When my oldest son was an infant, I learned about baby sign language. We started signing with him by 6 months and by 9 months he had taken off. As he learned to speak his doctor remarked that he had an impressive vocabulary for his young age. Strangers began commenting on how much he spoke, and how well. Even today he is a talker that will not stop. New research shows that this is more than just a coincidence.

An academic study lead by Elizabeth Kirk and funded by Economic and Social Research Council spent 2 years teaching low-income mothers to use sign language with their infants. Kirk held informal sessions where she taught mothers how to use Makaton gestures, basic gestures that represent actions. Makaton is a simpler form of communications that uses signs as well as some speech and picture cards. It was designed in the UK in the 1970’s by a speech and language therapist for use with disabled children and those not able to communicate well.

“We showed them shapes, talked about making eye contact, about coming down to the level of their baby, saying the word at the same time and waiting for a response,” Kirk said.

The mothers involved in the study felt that they were better able to understand their infants by the end of the lessons. Many reported that they felt less apprehensive about their child. According to Kirk, the research also shows that children of low-income families had a marked improvement in language skills when they were taught these signs as infants. She hopes the results of this will encourage Sure Start centers, which are aimed at low-income families, to begin regularly teaching these classes.

Baby sign language is a growing business in both the U.S. and the U.K. Many companies have developed that sell videos, books, and classes to teach sign language to families. Most of these companies base their products on the idea that this early communication can make a positive effect on later communication. This study shows that there may be some truth to this idea.

“Spending time interacting with your baby, and making the most of your hands when you speak as well as your voice, is the best thing that a mum can do to help her baby’s language to flourish,” Kirk says. – Summer, staff writer