We all want active, healthy children. But sometimes, that activity can result in injury – breaks, bruises, scrapes and even concussions. While most will heal up fairly quickly, injuries like concussions take longer than to heal than maybe some parents realize. In fact, a new study found that certain symptoms (particularly emotional ones like irritability) may not show up until physical symptoms are starting to disappear. These later symptoms can sometimes linger for months. 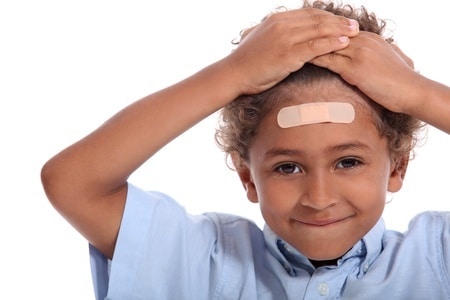 “Patients and their families should expect the physical symptoms that they experience after a head injury to get better over the next few weeks, but that emotional symptoms may come on later, even as the physical symptoms subside,” lead researcher Dr. Matthew Eisenberg told Web MD. “Only by knowing what symptoms can be expected after a concussion can we help reassure patients and families that what they experience is normal, know when to seek additional help, and make sure that children are taking appropriate precautions in regard to school and sports to achieve a full recovery.”

Published in the journal Pediatrics by the emergency medicine division at Boston’s Children’s Hospital, which included Eisenberg and his colleagues, the study followed and tracked 235 children and young adults (ages 11 to 22) treated at a pediatric emergency department. They were followed for three months, or until their symptoms completely disappeared.

Researchers found the most common symptoms to be headache, dizziness and fatigue. These symptoms generally showed up right after the injury, and improved over time. Mental symptoms, like difficulty concentrating and taking longer to think, were also common immediately after injury.

“It takes longer than people think to fully recover from a concussion. My experience is that kids who still have symptoms two weeks after a concussion are going to have a very hard time, and it’s going to be a struggle to get them to the point where they have no symptoms,” Dr. John Kuluz, director of traumatic brain injury and neurorehabilitation at Miami Children’s Hospital told Web MD.

Kuluz recommends that parents keep children out of school for the first couple of days after a concussion. After that, they should gradually work towards a more normal routine, starting with half days (or as much as they can tolerate) until all symptoms disappear.

“Keeping a child out of school for too long will have a negative effect on their mental health. They will become anxious, they’ll become irritable, because they worry about falling behind,” he said. “But if they go back too soon without teachers being aware of their condition, they can fail, and it happens a lot.”

Kuluz also says that sports should be completely omitted from a child’s schedule until after all symptoms have disappeared. Once they are better, sports and other high impact/potentially injuring activities should be gradually reintroduced.

In addition to treating concussions with mental and physical rest, Kuluz says that symptoms should be treated accordingly. If the child is suffering from a headache, ibuprofen should be given. If they are having trouble sleeping, melatonin or other drugs (monitored by a physician) should be administered. Other possibilities for treatment include physical therapy (which Kuluz highly recommends for children suffering from vision or balance problems).

“Therapy also helps you find your threshold for exertion,” he said. “Many of my kids find that very helpful.”

Kuluz also says it’s very important for parents to seek out a doctor experienced in dealing with concussions if symptoms last for more than two or three days after injury. This will ensure that the child receives the best course of treatment in the weeks and months to come.