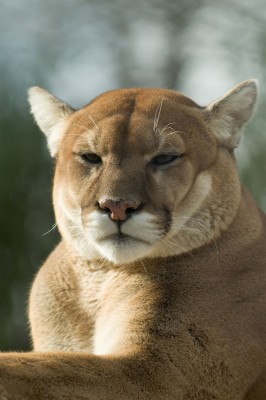 Mauren Lee has a lot to be thankful for today after she successfully wrestled a cougar off of her 3-year-old daughter.

Maya Lee is still recovering after being attacked by a cougar near her home Squamish, B.C.

Her mom was picking berries in the woods at about 7 p.m. Tuesday when she heard a sound and saw the big cat pounce on her little girl.

“He rolled her a couple of times and had her underneath him in kind of a fetal position on her back,” Lee said. “I knew I had to act fast and I just dove in between them and put my body on her and then I kind of stood up and used my body weight to push him off of me and just grabbed her and ran as fast and loud as I possibly could.”

After a neighbour heard her screams they drove her and Maya to hospital, where the young girl was treated for puncture wounds to her head and arms.

“I had a real weird sort of connection with the cougar, too, because there was a moment of eye contact and there was a long moment of physical contact because it was on my back and shoulders and arms and I had to pry him off and push him off.”

“During that time I had the sense that this creature was not a bad cat. It was just hunting. We were just unfortunately the prey it was hunting.”

Conservation officers tracked a male cougar and shot it late Tuesday night. DNA samples will be taken to confirm it was the cat involved, and also to help determine why the attack occurred.