As he rides his Lightning McQueen car down the hospital corridor, little Charlie Harris-Beard looks like your typical happy toddler. But this brave little boy was diagnosed with aggressive myeloid leukemia Easter Sunday, last year. Since then, his parents have been battling to save his life.

In October, Charlie received a ground-breaking stem cell transplant from the umbilical cord of an American baby. Sadly, weeks later, doctors told Charlie’s parents, Fiona and Joe, that the treatment had failed. Their little boy had only weeks to live. 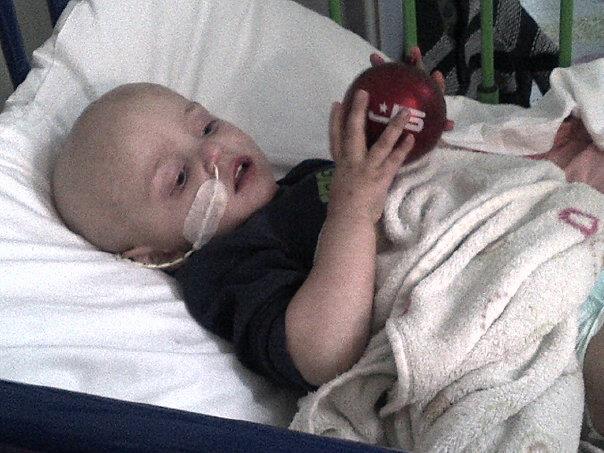 After learning the devastating news, Fiona and Joe pushed their wedding date up so that Charlied could be there. That adorable little boy, who just happened to be his daddy’s best man, made quite the appearance; he rode down the aisle on a motorized car and delivered the rings to his parents, the bride and groom.

Now Charlie’s parents have found something new to hope for; thanks to Fiona’s persistence, Charlie was able to take part in a clinical trial on a revolutionary new drug, Aurora Kinase. Fiona found the treatment after calling hospitals all around the world.

Charlie started the Aurora Kinase treatment last week. The drug is administered over 72 hours every 21 days intravenously. Designed to inhibit cancer growth by blocking the enzymes that allow cancer to grow, the treatment could put Charlie into partial remission, which would pave the way for further treatment for little Charlie.

“If this goes well, it would give a partial remission which would then mean that he can have radiotherapy and a bone marrow transplant,” Fiona said. “The hope is that, in the end, we will be able to get rid of the cancerous cells. I don’t want to say it will be a cure because I want to take every day as it comes. None of this would have come about without Cancer Research UK. It is a treatment that is only available abroad – they helped bring it to the UK.”

The family says that, if need be, they will spend Christmas Day with Charlie at Birmingham Children’s Hospital, but they are still hopeful that he will recover in time for the holidays, giving them a chance to have a somewhat ‘normal’ Christmas at home.

“It’s very hard, especially at Christmas. I want our daughter to have a normal Christmas, but with the treatment, we haven’t had a chance to even go shopping for presents yet,” Fiona said.

But no matter what happens, the family is doing their best to make Charlie’s life, however long it may be, a happy one.

“We’re trying to put as many smiles on his face as possible,” Fiona said.