Excited about the impending arrival of their second child, Katie Rice, and Mike Roussin went in for a routine 20-week ultrasound. They learned the gender of their baby – a baby boy – but they also received some very frightening news that day. 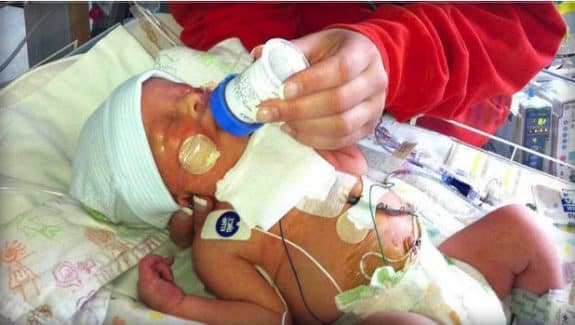 Image VIA The Children’s Hospital of Philadelphia

Katie and Mike would soon learn that the mass was tumor – an intrapericardial teratoma, which forms in the sac surrounding the heart. Though extremely rare, it is fast-growing and highly lethal of left untreated. Sadly, the treatment – draining the fluid around the mass while still in utero – is just as scary. It comes with serious risks, including death to the fetus.

Doctors referred the couple to the experts at Children’s Hospital of Philadelphia. They were informed of their options, possible complications, and their baby’s odds of survival. After two trips, and a major growth of the tumor over that time period, they decided to move forward with a complete removal of the tumor. It would be done while their son was still in utero.

“There was a uniform judgement we made. We saw them initially and then saw them about a week later and had documented the growth of the tumor and knew the fetus would not [survive if we did not operate],” the couple’s pediatric cardiologist and director of the Fetal Heart Program at The Children’s Hospital of Philadelphia, Dr. Jack Rychik, told CBS News. “The tumor can grow so wildly and it compresses the heart and it ends the pregnancy.”

So, just weeks after the first, fateful ultrasound, a multidisciplinary team comprised of experts from cardiology, surgery, imaging, and obstetrics conducted a three-hour surgery to remove the tumor. As it turns out, their timing couldn’t have been better.

“We just happened to have had some cases of the same diagnosis in the months leading up to it, and they were very frustrating and really sad outcomes. And so when Tucker’s mom presented, we adjust come off the heels of those other cases and the idea of ‘how can we make things better?’’ Dr. Holly Hedrick, an attending pediatric and fetal surgeon with the Children’s Hospital of Philadelphia, said. “It was really dramatic – the tumor growth – and when we looked at some of the prior cases and she was still okay, we knew that another week and we would have lost the war.”

The surgery was monumental in many ways: through the field of fetal medicine is not completely new, it was a first-of-its-kind success. It also happened to save Tucker’s life. He had to be immediately taken from his mother when he was born so that his sternum could be stabilized since it had not healed properly after the surgery, but other than that, he seems to be a rather healthy, now three-year-old boy.

“We have to go back to Philly once a year, and he has to get blood work done once a year here in Vermont, but other than that, he’s a typical three-year-old boy,” Katie said.

And their doctors, who say they are happy to have broken through medical barriers but are much more pleased to see the actual results, say they couldn’t be more impressed with how well he is coming along.

“Things are going beautifully,” added Ryhick. “There’s an emotional aspect of changing nature and where nature intends a poor outcome and reversing it 180 degrees and giving a normal outcome to this child. To give this child, a fetus, a normal quality and duration of life as a unique human being.”