In an extremely rare occurrence, a baby born in Hong Kong was born with two “fetuses” inside of her stomach. Both “fetuses” were joined to a “placenta-like” mass by umbilical cords. Each of them had skin, four limbs, a rib cage, intestines and primitive brain tissue. The case has fascinated doctors and medical staff nationally and internationally, and a study was even published in the Hong Kong Medical Journal . 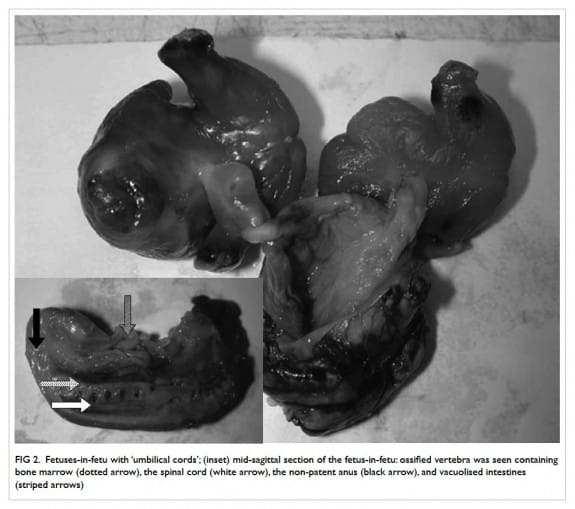 Dr. Nicholas Chao, one of the surgeons who performed the operation to remove these masses said the experience was, “one of those very rare things that make the world stand still.” Chao said that in his entire career in pediatric medicine, had never seen a case like this one before. The vastly unusual condition is known as “fetus-in-fetu,” and has been estimated to occur in only one in every half million births, but has been reported as happening less than 200 times globally.

The baby, who was born in 2010, weighed about nine pounds at birth. She recovered very well from the surgery to remove the masses, but doctors are still uncertain as to how the two masses got there in the first place, or whether or not they can even be called “fetuses.” Chao said, “There are controversies over what these things really are,” saying that they could be considered other fetuses that had also been in gestation with the baby, or could even be a very mature type of a tumor called a teratoma, in which cells divide and take on the maturity of the different types of tissues surrounding it.

Chao said, “Both theories are sound,” saying that there is “not enough hard scientific data to prove either one because of the limited cases.” The case continues to baffle the medical community to this day, although Chao and his colleagues did say that encountering twin fetuses-in-fetu is extremely rare. While the two “fetuses” had different weights, they did have identical organ development, and spines, “ambiguous external genitalia,” but they did not have any skulls.

The mother of the baby girl with the condition allegedly had a normal ultrasound early on in her pregnancy that suggested the tiny two fetuses may “have been tiny parasitic fetuses that had grown slowly” within the infant, according to the study recently published. The most popular theory of additional parasitic fetuses is that they begin to develop normally early on but then get absorbed by the faster and larger growing fetus and just stop growing.

Doctors in Hong Kong said that because of the mother’s care during the pregnancy, which occurred in mainland China, there weren’t any scans that showed what happened during the second trimester of the pregnancy. However, the mass was spotted by medical staff in an ultrasound done at 37 weeks gestation. When the baby was born, an exam showed that the mass was in between her left kidney and her spleen and measured approximately two inches across. The child’s parents were “initially surprised” about their baby girl’s diagnosis. However, the doctors told the parents the condition was not life threatening and her operation went off without a hitch.

Meanwhile, doctors are still puzzled and have a long road ahead of them before they receive any answers about the “fetuses.” Chao said, “You need a big series of these cases and lots of observations to get a more scientific understanding.”