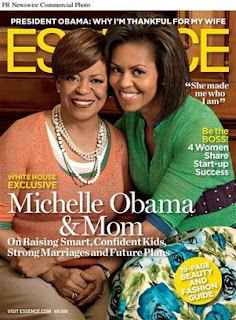 In their first interview together, First Lady Michelle Obama and her mother, Marian Robinson, sit down in the White House to speak exclusively to ESSENCE about retaining their family values, what it takes to raise good kids, and being role models for the Black community.

Mrs. Michelle Obama on what being First Lady means to her:

“It’s an honor and a privilege when you walk into the White House-at least I automatically felt a level of obligation. This is a big responsibility, a wonderful platform and I just want to make sure I take every advantage to serve as a role model, to provide good messages, to be a supportive mate to the President and to make sure that my girls are solid.”

Mrs. Marian Robinson on seeing her daughter step into this historic role:

“Well, to me, it’s overwhelming. I never doubted that she could do this. She is doing it with such grace and dignity. So I am just proud. I just hope she does what she wants to do. [Chuckles] Because the things that she wants to do are very important. They mean a lot to her.”

Mrs. Robinson on what her late husband, Fraser Robinson III, would say about this moment:

“You would not be able to shut him up! He would not be able to stand this. He would be beaming until you would just want him to stop talking. He bragged about Michelle and her brother, Craig, before they had even done anything. He always encouraged them, and when he talked about Craig and Michelle, you could just see a smile on his face whether it was there or not. He just enjoyed these two people.”

Mrs. Obama on her parents’ support:

“I always felt that my father and my mother were unconditionally rooting for me. And kids need that. Looking back that played such a huge role in building confidence in me and my brother very early. Whether we succeeded or failed, we had two people who lifted us up and supported us. There was never anything that I could imagine that I would need that they wouldn’t bend over backward to make sure that we had. There is just a sense of security that allows you to take risks. People think that it comes from wealth or generations of access and success, but it doesn’t. The security of your parents’ love really gives you the foundation to think that you can fly. And then you do.”

Mrs. Obama on how her mother has influenced her own development as a mother:

“She completely underestimates her role in who I am. She always says, “You came here that way, I just stayed out of your way.” That’s not how I saw it. My mom is an incredibly intelligent and insightful person about life in general. From the time we could talk, she talked to us endlessly about any and everything with a level of openness and fearlessness that made us believe that we were bright enough to engage with an adult, that we were worthy enough to ask questions and to get really serious answers—and she did it with a level of humor. There were many times when we were in the midst of getting spanked or disciplined and she would start cracking up. She taught my brother and me not to take things so seriously; to work hard, but to learn to laugh at situations and laugh at yourself and then to move through it.”

To read the complete interview, pick up the May 2009 issue of ESSENCE, on newsstands everywhere April 10.