Gus Hutt was early morning fishing on Matata Beach at the end of October when he spotted something floating by his boat. 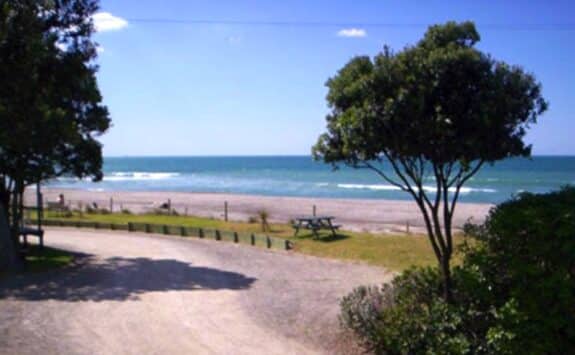 “As he floated past I thought he was just a doll,” Gus told the NZ Herald. “[Even as] I reached out and grabbed him by the arm, I still thought it was a doll.”

“His face looked just like porcelain with his short hair wetted down, but then and he let out a little squeak and I thought ‘oh God this is a baby and it’s alive’.”

Had he checked his line a minute later he would not have seen him.

“He was bloody lucky, but he just wasn’t meant to go; it wasn’t his time,” he recalled.

Gus’s wife quickly alerted staff at the camp. Emergency services took the toddler to Whakatane hospital where he was released home later that day.

Rebecca Salter the owner of Murphy’s Holiday Camp revealed the little boy had been so excited to be on the beach that he undid the tent zip and wandered into the ocean while his parents were asleep.

Rebecca said: “It came as a shock to everyone. It was a very, very lucky result … it could have been a very tragic incident. It’s a freakish miracle.”

Jessica Whyte, the baby’s mom said it felt like a sick joke when she was awoken to the news at 7.30am.

Despite his near-death experience, the toddler was all smiles when the parents later stopped by to thank Gus for saving their son’s life.

“He was wriggling trying to get down to have a look at everything, he was just a lovely, cheeky little fella,” he said.