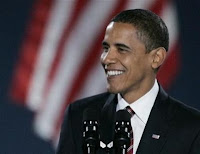 Even though the presidential results were still coming in at 10 p.m. last night Sasha Hall named her baby boy after the next president – Obama Hall.

Baby Obama isn’t the only one with a connection to Barack Obama — his mom, Sasha, shares a name with the president-elect’s 7-year-old daughter.

Because this presidential victory was so ground breaking, I can see this being a trend for many years to come.