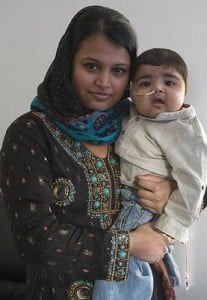 A UK family, who had already lost a son, is thankful to the doctors at Great Ormond Street Hospital in London and a mystery cord blood donor, for their 11-month-old son’s amazing recovery from a disease that normally takes a child’s life before they turn a year, if untreated.

Nila Ahmed  and her husband Mirza both carry a faulty gene that affects the immune system. The two have one in four chance of conceiving a child with severe Combined Immune Deficiency. If a baby is born with the disorder their body cannot make sufficient white blood cells and therefore becomes vulnerable to all kinds of infections.

While the Ahmeds were lucky with their eldest son Umar, four, who did not have the disorder, they lost a child also named Mirza at four months because his body could not fight infections.

In Imtiaz’ case, he too was not able to manufacture sufficient white blood cells and suffered from the disorder commonly known as ‘bubble boy syndrome’.  He couldn’t survive without treatment which prompted the Ahmeds to look for a possible bone marrow transplant.  Both Nila’s sister and brother were found to be matches however the transplant was not possible because of a common virus both had that could affect Imtiaz.

Without other options doctors decided to use cord blood cells that are free from any viruses and performed the operation in May. The cord blood cells came from the umbilical cord of a donor mother. The doctors used the stem cells to restore the normal activities of the baby’s immune system.

More and more hospitals are relying on cord blood transplants rather than bone marrow transplants because of the rapid action on the immune system.  Stem cells have the ability to transform into any other cell in the body relatively easily and faster.  In Imtiaz’s case, they transformed into infection fighting white blood cells.

“I’m just so grateful my son is alive and I’m very grateful to the mother who donated her baby’s cord so my child has the chance to be the normal fun-loving child he deserves to be.”

Moms-to-be in the US, who are not banking their baby’s cord blood for future use can donate theirs as well.  Marrow.org has details on how this can be done. – Atula, Staff Writer