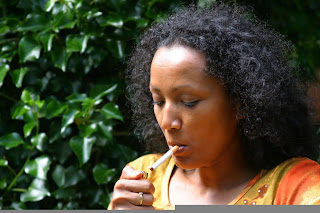 Doctors from MassGeneral Hospital for Children in Boston want parents to know that opening a window or turning on a fan to clear the air of second-hand smoke isn’t as effective as they think.

A chemical that is being left behind is called ‘third hand smoke’.

That’s the term being used to describe the invisible yet toxic brew of gases and particles clinging to smokers’ hair and clothing, not to mention cushions and carpeting, that lingers long after smoke has cleared from a room. The residue includes heavy metals, carcinogens and even radioactive materials that young children can get on their hands and ingest, especially if they’re crawling or playing on the floor.

“Everyone knows that second-hand smoke is bad, but they don’t know about this,” said Dr. Jonathan Winickoff, the lead author of the study and an assistant professor of pediatrics at Harvard Medical School.

“When their kids are out of the house, they might smoke. Or they smoke in the car. Or they strap the kid in the car seat in the back and crack the window and smoke, and they think it’s okay because the second-hand smoke isn’t getting to their kids,” Winickoff continued. “We needed a term to describe these tobacco toxins that aren’t visible.”

Third-hand smoke is what one smells when a smoker gets in an elevator after going outside for a cigarette, he said, or in a hotel room where people were smoking. “Your nose isn’t lying,” he said. “The stuff is so toxic that your brain is telling you: ‘Get away.'”

The study reported on attitudes toward smoking in 1,500 households across the United States. It found that the vast majority of both smokers and nonsmokers were aware that second-hand smoke is harmful to children. Some 95 percent of nonsmokers and 84 percent of smokers agreed with the statement that “inhaling smoke from a parent’s cigarette can harm the health of infants and children.”

But far fewer of those surveyed were aware of the risks of third-hand smoke.

When asked if they agreed with the statement that “breathing air in a room today where people smoked yesterday can harm the health of infants and children.” Only 65 percent of nonsmokers and 43 percent of smokers agreed with that statement.

Before we left the NICU with our son, both the doctor and head nurse sat down with us and warned us about the dangers of ‘third hand smoke’. I wish that more medical professionals would speak to new parents about these dangers.