Home » Pregnant With Triplets…Would You Chose A Reduction?

Today, over at momsquawk they are discussing this story where a mom found out she was pregnant with triplets after going through fertility treatments. 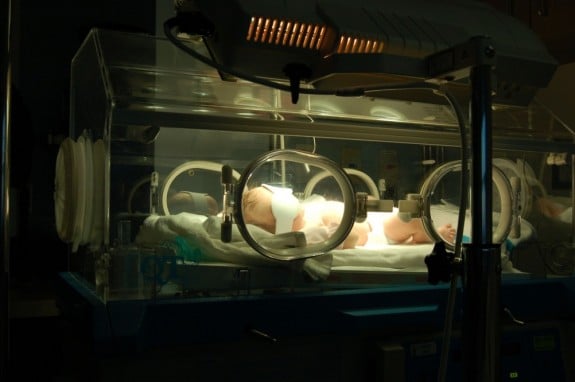 My mouth fell open. My husband had to steady himself against the wall. There was no jumping for joy at the tiny heartbeats. I continued to stare in disbelief at the monitor. How could I possibly carry three babies to term in my 120-pound body? And what would happen if I couldn’t?

“Sometimes one or two of the fetuses can fade away after a few weeks,” the doctor said. “But in your case, all three heartbeats are very strong. I think we need to talk about a reduction.”

“You need to consider reducing to one or two fetuses. In triplet pregnancies the babies often are born very premature with a lot of complications. You may be saving the lives of the other two by eliminating one.”

How can the same doctor that helped this family become pregnant with multiples suggest they terminate one or two of the babies.

Once you elect to go through such a aggressive form of fertility treatment, the chance that you may be pregnant with more that one baby is increased dramatically.

It is a miracle for three babies to fertilize, implant and survive. At that point you are having 3 babies unless something naturally happens.

It is also wrong of this doctor to scare the parents into thinking that these babies cannot be delivered successfully without complications or issues later. There were many multiples in the hospital when my son was born. Every outcome was different because each no two pregnancies are the same. Your health before you were pregnant, diet, exercise, stress level, race, gender and complications all play a role in the outcome.

The doctors told us our son may not walk or talk. They had to tell us the worst case scenario due to the fact he was born so early. It didn’t matter to us – he was the only son we had.

In this case, the parents decided to consult many specialists, with one telling them:

The chances of having severe complications in a triplet pregnancy are only 2 percent greater than with twins once you pass the 26-week mark. Babies born earlier than 26 weeks, which happens in roughly 14 percent of triplet pregnancies, almost always suffer serious handicaps, and many die. Then again, the reduction procedure itself carries the risk, however small, of terminating the entire pregnancy.

I know there are risks involved, but every day women carrying single babies go into preterm labour and deliver at 22,23,24 weeks gestation. There are always risks when you are pregnant!

After deciding to keep all three babies this mom found out at 19 weeks her cervix was about to open and had to have surgery to sew it shut. By 22 weeks she was admitted to the hospital and ordered to be on bed rest with no bathroom or shower privileges. No leaving the bed for any reason. After making it to 25 weeks the Neonatal Doctor said “You do not want to have these babies now. Every day, every hour, is critical. You have to hang in there until 26 weeks.”

On Christmas Eve all three babies were born, at exactly 26 weeks gestation, each weighing under 2lbs. They were frail but alive!

During their second and third months, the boys grew from scrawny, fragile beings into fully formed little babies. We rejoiced at each milestone — the first time we could hold them (2 weeks), the day they could breathe without the ventilator (4 weeks), the first real bath in a plastic tub (8 weeks), the move out of the incubator and into a joint crib (10 weeks), when they could drink my breast milk comfortably from a bottle (11 weeks), and, finally, the day they were discharged (3 months).

These boys are 4 now, all thriving in preschool and developing well.

This family has never looked back at what could have been, all they know is that they didn’t do what everyone advised them to do.

Special babies and given to special parents. The road may be long, but in the end you will have a bigger appreciation for what you have been blessed with…special needs or not.

Sometimes you need to trust yourself and pray for the best.