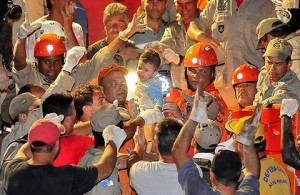 This week, the evening news has brought us some terribly upsetting images from Brazil.  Torrential rains have caused landslides, affecting communities in the mountainous region 65 km north of Rio de Janeiro.  Communities have been devastated.  Homes have been, literally washed away.  It has become the most deadly natural disaster Brazil has experienced.

But, out of the horror, there has immerged a miracle.  Six-month-old Nicolas Barreto and his father, Wellington da Silva Guimaraes were rescued by a team of firefighters after a 15 hour interment.

The pair survived in an air pocket, sheltered by a fallen concrete roof.  Wellington wrapped himself around his tiny son for protection.

Nicolas had been visiting his grandmother in Nova Friburgo, one of the hardest hit communities, along with Teresopolis and Petropolis.  The disaster has claimed 500 lives, but that number is climbing as bodies continue to be exhumed from the mud.

Vicente Luiz Florente’s brother has yet to be located, after he was buried in the landslide that hit Teresopolis.  “It’s ugly, really ugly,” Vincente said.  “This was a community – now all you can see is rocks.”

While Nicolas and Wellington are now safe and sound, they have not escaped the grief the landslides have inflicted.  Several hours after their rescue, Nicolas’ mother and grandmother were found dead.

Never-the-less, the baby’s grandfather, Ademilson Barreto Guimaraes wept as his grandson was pulled to safety.  “There’s no way of explaining this.  It really is a miracle,” he said.

Truly, in situations like these, any good news is a miracle. – Jen R, Staff Writer