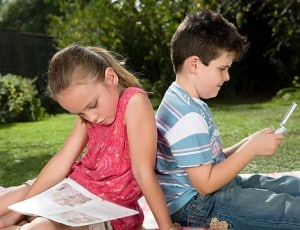 Girls as young as 4 years-old may be picking up on stereotypes about gender, which then become a self-fulfilling prophecy in school. Both boys and girls appear to be influenced more by how it is assumed they will act, than how they really do. A study from the University of Kent asked students questions about personality, attitude, and academic skills, which the children were required to answer based on gender. The students, between ages 4 and 10, were shown a silhouette of a male or female student and given statement, such as “this child is really clever” and “this child always finishes their work”, about the person. They were then asked if they thought the statement was true or false.

Girls as young as 4 all chose the female silhouettes when cleverness, better behavior, and respectfulness were the statements given. For the most part, the girls saw themselves as being smarter and better behaved than the boys based on gender alone.

The boys answers, however, appeared to be more equal among the younger students surveyed. The older the student, however, the more in line the boys became with the girls’ believes.

The believes behind these feelings may be more about the gender stereotypes children pick up than reality.

The students were also given general tests on their knowledge of math, reading and writing. They were broken into two groups to take the test. In the first group, the students were told beforehand that boys did not do as well on this type of test. Not surprisingly, the boys in that group did score “significantly worse” than the boys who were not told this. These findings point to boys acting to perceived expectations rather than their true potential.

Bonny Hartley, leading the study, warns that common phrases such as “school boy pranks” or pointing to girls as behaving better can set the bar for boys and girls. Children may be influenced more by the stereotypes they perceive than actual gender differences.