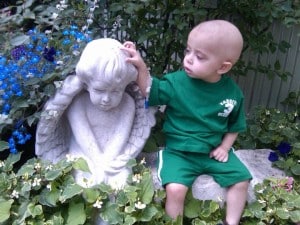 Cash (Cashy) Hyde, nicknamed ‘The Boy of Steel’ by staff at Primary Children’s Hospital in Salt Lake City, UT, was diagnosed with an aggressive PNET tumor in his brain, last year, shortly before his second birthday.  By the time he was diagnosed and reached the children’s hospital, the tumor was wrapped around his optic nerve and was pushing his eye out of its socket.  He was a very sick little boy.

Surgeons operated but, because of the size and position of the tumor, were only able to remove 10 percent of the mass.  Doctors turned to chemotherapy to eliminate the tumor instead.  That is when a very sick little boy, became an incredibly sick little boy.

Doctors prescribed three rounds of high-dose chemotherapy, followed by stem cell rescue.  The therapy was almost more than Cashy’s young body could take.  Through his treatment, he suffered seizures; extreme nausea, vomiting, and an inability to eat.  He battled a blood infection, which resulted in septic shock.

He, “ended up coding and they had to resuscitate him,” his father Mike recalled.  “I was standing like two feet away, I had to watch the whole thing.”

There were a number of occasions when Cashy’s parents were told to expect the worst, but he persevered.

The chemo took its toll however, “By the end of September, he had gone 40 days without eating, he was vomiting 9-10 times a day, he couldn’t lift his head off his pillow, he was laying there shivering,” Mike said.

Mike took matters into his own hands and started placing a few drops of cannabis oil in Cashy’s feeding tube.  The improvement was speedy.  Soon Cashy was eating and was able to be weaned off of the cocktail of anti-nausea medications he’d be prescribed.

Cashy completed his last round of chemo without the ant-nausea medications.  Doctors couldn’t believe it, but Mike felt unable to explain.

“I wanted to tell them – hey, he’s on cannabis oil – but I didn’t want them to take it away from him.”

These days, however, Mike sings the praises of medical marijuana, and credits it for his son’s survival.

“The only way for medical patients to benefit from cannabis is for us to have it legalized fully.  Until it’s fully legalized, police and law enforcement will continue to harass and invade patients’ rights, and take their medicine away.”

Cashy has completed his treatment and is currently cancer free.  He’s living the life of a healthy three-year-old in Missoula, Montana.

The Cash Hyde Foundation has been established to provide information and awareness of children’s cancers and to raise funds for equipment for children’s hospitals. – Jen R, Staff Writer