Many moms who have had multiple children often lament about how their first child was very mild mannered, slept well, ate well, etc. Seattle mother Keenan Sanders says that Logan, her first child was such “a breeze” that her other mom friends would often be annoyed at how well things went with him. With no problems to speak of with Logan, Sanders was not prepared for the heartbreak she’s recently experienced after delivering her daughter Leighton, who’s first weeks of life have been filled with medical tests, procedures and surgeries. 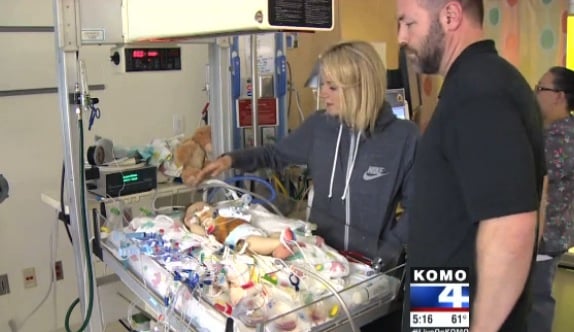 It all began when Leighton’s parents noticed that she had a distended belly. Initially, they thought that it was just bloating from a little gas. However, in a mere matter of days, her belly got larger before doctors found a tumor that was growing rapidly, increasing from the size of an orange to the size of a cantaloupe.

“Then it got worse and worse. Now we’re dealing with I’m gonna have a child that’s fed through tubes, has drains coming out of her body, who won’t eat, and will be in the hospital for a very long time.”

The tumor had attached itself to nearly every organ in seven week-old Leighton’s tiny body. In the past week alone, the infant has undergone six surgeries and she is expected to have two more soon. At Seattle Children’s Hospital, physicians have removed the tumor, as well as the newborn’s bowels, gall bladder, a part of her pancreas, intestines, colon and stomach. 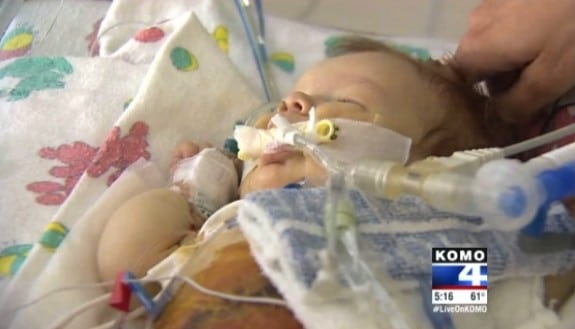 The grim reality of the situation is all too much for Keenan to experience all at once.

“When I start to take everything in at once, I can’t handle it,”  He told komonews. “I can’t listen to it. It becomes too much when I hear every single obstacle that she faces and will face. It’s overwhelming.”

Leighton lost 3lbs after the surgery going from 8.5 to just 5.5 pounds. Both of her parents are constantly at the child’s bedside in the intensive care unit, holding vigil. Leighton’s tiny body has to become much stronger before her parents and doctors can even begin to discuss further treatment options such as reconstruction and transplants. Her father, Dave Sanders says,

“You never want to see anything like that with your daughter, your baby girl. There’s a long battle to go, it’s tough, it’s tough.”

However, the devastating blow of their daughter’s medical tragedy has been softened by the love and devotion of the family’s community rallying around them. Keenan had been at the hospital one day, perusing her Facebook news feed when all of a sudden she noticed a photo of herself. One of her friends had launched a fundraising campaign for the family’s household expenses on GoFundMe. To date, it has reached more than $25,000 in donations. Sanders says, “The outpouring of support for our daughter has been unimaginable.” Test results should arrive later on this week to find out if the tumor is cancerous.