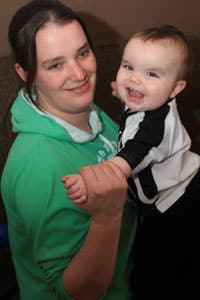 A UK family has a lot to be thankful for this holiday season after a pair of quick thinking store employees saved their baby’s life when he fell ill and lost consciousness.


Marie Johnson of Benwell, Newcastle and her partner Robert Clifford are parents to 13 month old Robert who suffers from a rare genetic disorder. He was born with Congenital Adrenal Hyperplasia (CAH), a disorder of the adrenal glands. It is this gland that helps keep the balance in the body by producing right amounts of hormones like cortisol, aldosterone, and androgens. But in the case of baby Robert due to the disorder he vomits regularly, gets fits and sometimes has dangerously low levels of sodium in the body.

Last Monday the family, along with their five year old daughter Holly were in Santander bank when Robert fell ill.

“Robert had vomited in the bank and we were going to take him to the walk-in centre but when we got to Northumberland Street I looked in the pram and he was lifeless,” Marie said. “He was really pale and his lips had turned blue.”

The panic stricken mom took the baby to the first store she could find and that was the Boots store. Marie carries a steroid syringe with her in case of such kind of emergencies but at that moment she was too hysterical to think clearly.

Thankfully, the staff at the pharmacy came to her rescue.

“I carry an emergency steroid injection for Robert but I have never had to give it to him and I was totally panicking and didn’t know what to do,” said Marie. “We were just outside Boots so I ran in. Before I even got a chance to ask them to ring an ambulance they were on the phone. Then the staff just took over and helped us.”

“The pharmacist lifted Robert out of the pram and took him into the back. They kept my daughter occupied and gave her some sweets, then one of the staff helped prepare Robert’s injection and showed me how to give it. He had fitted and stopped breathing and the pharmacist said we had to keep him awake. He knew exactly what to do. And they were explaining on the phone exactly what had happened, when they called the ambulance.”

“I was so scared and worried but they were all fantastic.”

Robert was then taken to a hospital where it was found that his blood sodium level had dipped dangerously low. Luckily, he only needed to stay in hospital for three days and Marie can’t thank the staff enough.

“I am just so grateful to all of them. If it wasn’t for them he could have died. They were fantastic and never panicked once where I was frantic. They were very cool and calm right up until the ambulance arrived.”

Adding, “I am just so grateful. They have quite possibly saved my baby’s life. I cannot think of a better way to thank them other then let everyone know what a great team they are.”